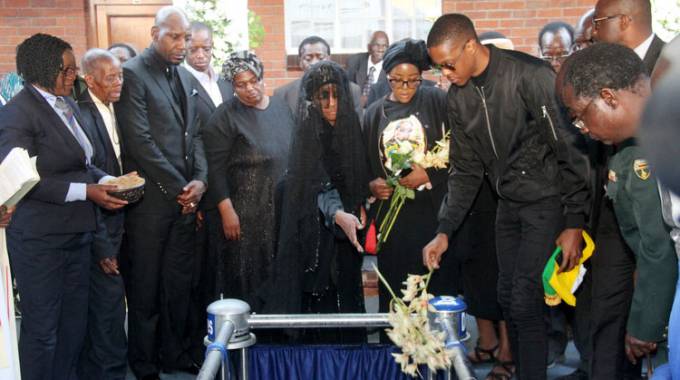 Government has granted former President and national hero Cde Robert Mugabe his death-bed wish for his remains to be interred at his rural home in Kutama, Zvimba, Mashonaland West province.

The former President was yesterday interred at his rural home in a ‘specially constructed site’ in the courtyard of the house of his first wife, Sally.

The burial was conducted in accordance with Roman Catholic rites, which were presided over by Father Paul Tigere of Marymount Parish.

Family members and a handful of villagers related to the Mugabes attended the event. Mashonaland West Minister of State for Provincial Affairs Mrs Mary Mliswa-Chikoka was among those at the funeral.

The Mugabe family expressed gratitude to President Emmerson Mnangagwa for allowing them to bury the late national hero at his rural home.

In his vote of thanks, family spokesperson Mr Walter Chidhakwa outlined the support the former President had received from President Mnangagwa and his Government, during his illness.

“We want to thank President Mnangagwa and Government. The journey that we have travelled with the late Cde Mugabe has not been easy. It was full of pain.

“Amai (Mugabe) used to say she wants to take baba for medical check-ups in Singapore and we would approach President Mnangagwa. In no time he would assist us with travel arrangements before we return.

“But in the last visit, baba did not return as his condition deteriorated, leading to his death. President Mnangagwa sent a plane together with Vice President (Kembo Mohadi) and he received us at the airport.”

Added Mr Chidhakwa: “The President then assisted us with transport, food and other logistics before conferring baba a national hero.

“We thank President Mnangagwa because since the death of baba, he said he will let the family decide on funeral and burial arrangements.

“But it is not the family that decided, vaMugabe is the one who said he wanted to be buried here at his home. We simply followed his wish and we are happy President Mnangagwa has also granted him that wish.”

Mr Chidhakwa dispelled speculation there was bad blood between the former first family and Government.

He said as a family, they were not going against the ideals of Zanu-PF and Government.

Mr Chidhakwa added that the family was thankful for the military that had acted professionally in handling the former President’s body.

“The military has made us proud. They are the ones that have been carrying the casket from day one up to today. They have made us proud with the dedication, professionalism and honour they have given to Cde Mugabe.

“When I look at the low numbers here I say to myself, we had hoped that we bury baba like other national heroes. But what we have done is to respect his wish.

“He said he did not want to be buried at the National Heroes Acre. Even if it shows as if there are a few people here, we are happy that we have respected baba’s wish.”

Ms Gumbochuma also praised the late national hero as a champion of economic empowerment, adding that the legacy he left after the land reform programme could never be erased.

He said many beneficiaries of the land reform took pride that they have an asset they can pass to their children.

In his homily, Father Tigere said the former President lived a worthy life.

“Let us celebrate a life that was lived worthily. Go well, we will always remember you for the legacy you left us.

“The late had his failures, but we should also understand we are human beings and also have areas that we fall short.”