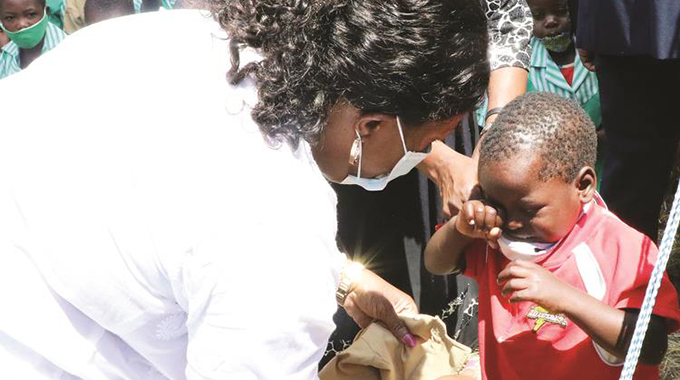 First Lady Auxillia Mnangagwa dresses a Simukai Primary School pupil in new uniform. The ECD pupil, who could not wait to get his new uniform, jumped the queue while crying and insisted on being dressed by the First Lady.Pictures: John Manzongo

LEARNERS at Simukai Primary School in Seke are this year set to open their school term with a difference, thanks to the intervention by First Lady Auxillia Mnangagwa and her Angel of Hope Foundation, who provided them with uniforms she personally sews, stationery and improved amenities at the institution.

The school now has electricity, thanks to Amai Mnangagwa who also introduced a feeding programme for learners.

Nestled deep in rural Seke, the school largely caters for children of farm workers most of whom had dropped out owing to hunger and failure to raise fees.

Children at the school did not have uniforms and other essentials like books, pens, pencils, crayons, and rulers, which the mother of the nation provided on Thursday last week.

Last year, the First Lady paid school fees for all the pupils at the school for the whole year.

This is not the first time Amai Mnangagwa has worked with impoverished schools as she has also been to Maypark school in Mashonaland Central, which faces similar circumstances.

Just like in the Maypark case, last year she visited Simukai school to assess its challenges and how best to assist.

Recently, she donated uniforms at Maypark, which she personally designed and sew, furniture and stationery.

At Simukai, after dressing up the pupils in their new uniforms, Amai Mnangagwa fed them with sadza, beef, sugar beans and vegetables. She also fed all the children from the farming community who had come to witness the occasion.

An ECD-B pupil at the school triggered laughter and sweet memories when he cried out seeking to be dressed by the First Lady.

Amai Mnangagwa was equal to the task showing her love for the children.

She hugged him, wiped his tears and dressed him in the new uniform, bringing a smile to his face.

“I am happy to say that after the coming in of the First Lady, performance at Simukai improved significantly from 21 percent to 43 percent while that of the district decreased by 11 percent and the provincial one decreased by 12,16 percent,” she said.

“When she visited the school last year, she left money which was used to electrify the school. She also bought a laptop for the school to allow Grade Seven candidates to register.”

The school headmaster Mr Timothy Zvinoyera highlighted some of the challenges which his school was facing which prompted the First Lady to act.

“Simukai has an enrolment of learners who love their school, but because of poverty their learning is difficult,” he said. “The learners used to come in different attires, while a few managed to buy uniforms.

“As we know, once learners put on different clothes, they look down upon themselves and concentration is affected. The children will be busy emulating each other without paying attention to the teacher.

“Our catchment area is that of children of farm workers. Their greatest challenge is failure to pay school fees. Even if you engage the parents, they will plead poverty. This challenge was, however, solved by the First Lady when she paid school fees for all the learners last year.”

Mr Zvinoyera said they faced hunger which made it difficult for learners to attend school regularly.

“Some pupils used to report for school weak because of hunger,” he said. “We have ECD classes and there are times you see that the children will be hungry. Because of poverty, some parents no longer viewed education as valuable.

“This forced most children to drop out and the most affected were girls who were being married before even completing Grade Seven. Most of them were eloping even to elderly men and you automatically see that life would have been lost. However, due to Amai’s intervention, early child marriages would be a thing of the past in our community.” Mr Zvinoyera said talents in most learners was not being developed fully due to early marriages and said he had been relieved by the First Lady’s intervention.

“We are now affording hot meals a day because our mother gave us food,” he said. “The feeding programme solved the problem of absenteeism to a large extent.”

Mr Zvinoyera said when the First Lady paid fees for all the learners, it made all children attend school and with the school now electrified, the learners can embrace information communication technology.

He thanked the First Lady for clothing the school children whom he said had nothing to put on.

In her address, the First Lady said during her initial visit last year, she sought to understand the children’s needs and they told her of their quest for uniforms and other school consumables.

“I came here last year and discussed with the children who showed zeal to pursue their education, though they did not have the requirements,” she said. “They told me that some of them had dropped out due to lack of school fees.

“Some said they travel long distances to school on empty tummies which affected their concentration. They said they felt ashamed to attend sporting activities with children from other schools because they would be wearing tattered clothes.

“This touched me as a mother and I saw it fit to find them the little I could to ease their plight. An educated child has a brighter future and will not struggle in life. Education is important and children should enjoy going to school and I paid fees for the whole year and provided money to electrify the whole school. I bought the school a laptop computer for easy record-keeping.”

On health and nutrition, she urged parents to always prepare healthy traditional food for the children before urging them to preserve all vegetables that are abundant this season for future use.

She implored parents to take care of their children, especially these days of overgrown grass and maize, saying protecting children was not for the police alone.

She said children must grow up morally upright, hence the need for parents to train their children.

The First Lady said she wanted the school to succeed through projects like farming and gardening before urging women around the area to start self-help projects. “We cherish the fruits of your kindness Amai,” she said. “Your hand gives and God pays back. You introduced a feeding programme and this school benefited. This is a very small school, but you came here and did not focus on affluent schools. Today you gave them uniforms which makes them not feel shy to come to school.”

Members of the community showered the First Lady with praises for improving their children’s access to education.

Mrs Faustina Mapfumo said they never dreamt of being remembered by the mother of the nation.

“This area is under-developed and we are deep in the forests where we struggle for survival,” she said as she ululated. “We perform menial tasks for people and at times we are not paid and end up appearing as though we do not want to send our children to school because we will be broke.

“However, our mother has come to uplift us. Our children now have school uniforms and stationery, hence the money we will get after working on farms, we will now buy food for the children since Amai has catered for their school needs.”

Happiness was written on the faces of all members of the ward nine community.

Mrs Constance Murombo said she had never been as happy as she was following the timely donation.

“Our mother heard our challenges and was quick to come to our rescue,” she said. “Some children here were no longer going to school as they were now going to work with their parents in farms to eke out a living. “Some of the people we work for do not pay us and the hunger we were facing has been eased by the First Lady as children are now being fed at school. This school is in the deep forest and no one ever remembered it.

“The First Lady has shown favour to this school. A home without a mother is dead. Our mother has come and she is filling us with warmth.”

Village health worker, Mrs Sibongile Mahachi, said she worked around five farms in the area where cases of children fainting due to hunger were common in schools.

The situation, she said, changed following the intervention of the First Lady.

“Since we came here, we have never seen this kind of love. We were living like orphans, but the First Lady has remembered us and we are grateful.”