From corporate boardroom to farming 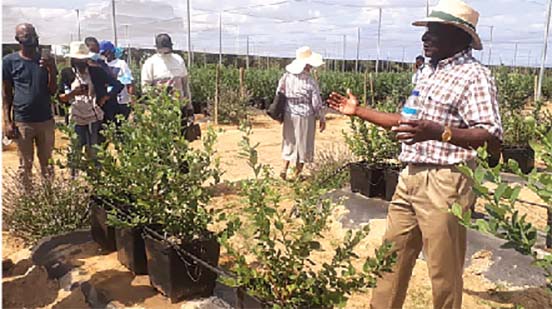 When Marondera based farmer, Helen Lock, made a remark to Willard Zireva that it was nice to see him at the farm, the former OK Zimbabwe chief executive officer’s answer was a perfect explanation to the aspect that farming is a business.

“With the amount of money we have had to pump into the blueberry project, I have to be more on the farm because we used our personal savings,” Mr Zireva responded.

This reply was pregnant with lessons, the first one being that when one decides to venture into farming, one has to be prepared to invest. As the old adage says, you reap what you sow.

The use of personal savings also speaks to the issue of sacrifices and risks that one has to take when getting into farming.

Most would be farmers do not want to use their own resources as farming capital. They would rather borrow, but as the Bible says, for where your treasure is, there your heart will be also. Many will end up languishing in debt, because they have no attachment to the bank loan and do not make it sweat.

Those in the know will tell you that it can be difficult to borrow from a bank or attract other investors unless you’re also investing some of your own money.

At his farm, Mr Zireva has invested a lot.

His blueberries venture cost him US$100 000 per hectare and he is planning to double the current three hectares.

Every hectare of his peas crop, costs him US$8 000, and he normally has more than 10 hectares per season.

For water, he had to construct a dam, and installed a water/irrigation pump worth US$28 000. After losing 14 hectares of peas, following power outages for two weeks, he invested in generators to guarantee power supplies.

“It’s a farm where we are trying to get things to work, its work in progress. You can see that we have buildings taking place all over,” Mr Zireva said as he welcomed fellow farmers invited to tour his farm by Zimtrade under the Best Model Farm project.

These are just a few of the investments made at his Talana Farm in Chegutu, a clear testimony that without capital, farming could easily be a futile exercise.

The second lesson is that farming is a hands on activity. One has to be on the ground. Cell phone farmers have very little chance of success.

As Mr Zireva led the tour at his farm, he articulated every aspect of the farming activities, from input procurement to the export market. One could tell he was hands on and knew at least something about everything going on at the farm despite the fact that there is a farm manager.

If one is to venture into farming for the export market, one has to know the right varieties, the chemicals to use and not to use. One also has to know when to export and to where.

According to Mr Zireva, the basic requirement for farmers who want to export is to have a market.

This resulted in Talana Farm’s first direct exports to Europe without relying on middlemen.

In November 2019, Mr Zireva himself went to the Netherlands with Zimtrade and got some additional customers through that.

The second export requirement is to be certified by Global Gap among others.

“The certification process means you have to have facilities which are acceptable in terms of the European standard, our biggest market.

“We had to have proper cold rooms, the cold chain had to be maintained, and you had to use chemicals, which are not banned in Europe, which is a requirement,” Mr Zireva explained.

A farm must even have ablution facilities and running water to meet some of the export requirements.

Mr Zireva also stressed that one of the biggest threat to successfully export is product quality.

If your quality is not right and your customer in Europe picks that, they can condemn the whole consignment, he said.

“It’s interesting and exciting, but like all other things, you have to do them properly, otherwise you are just going to be losing money,” Mr Zireva noted.

This is probably testimony why his farm was chosen as one of the four for the Best Model Farm project.

As no one can claim to know it all, the Best Model Farm project provides a senior expert from PUM Netherlands, to help farmers like Mr Zireva meet the required export standards.

Currently, Peter Caminada is the Zimtrade assistant associate working with the farmers and conducting monthly visits and assisting these model farms in a number of areas including technical interventions, cold chain management, issues to do with soil tests, issues to do with agronomy and nutrition among others.

While the agreement covers a wide range of sectors, horticulture is prioritised due to its potential for export growth.

In line with the project objectives, two weeks ago Zimtrade arranged a tour of Talana Farm.

At least 10 farmers, both smallholder and large scale, were part of the tour.

Also present was Mrs Beatrice Mutetwa, a farmer and Chief Director in the Ministry of Foreign Affairs and International Trade who was accompanied by several officials from the ministry.