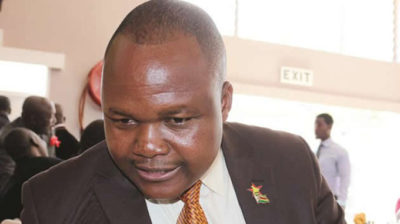 In a statement yesterday, Gandawa, a former deputy minister of higher and tertiary education in the late Robert Mugabe’s government, said he regretted joining Zanu PF.

“I deeply regret having worked with Zanu PF,” said Gandawa.

“It was a significant error of judgment to have ignored the party’s past violations in the interest of political expediency.

“I accept that I must bear the distrust and suspicion that accompanies all those who have dined with the devil, and work to restore the reputation I built before entering government.”

Gandawa revealed he fell out of favour with President Emmerson Mnangagwa’s associates after he rejected moves to recruit him into the faction, which at the time was accused of plotting Mugabe’s overthrow.

“My great undoing came about after a state media journalist attempted to recruit me in a plot to overthrow President Mugabe, claiming he had been sent by then Vice President Emmerson Mnangagwa,” Gandawa opened up.

“I was compelled by the oath of office to report the incident and recorded a second episode with the same journalist. That audio recording is now in the public domain through no actions of my own.

“The publication of that recording immediately identified me as being hostile to Mnangagwa’s ambitions and brought me into the direct line of factional political fire, resulting in my removal from government at the 2017 coup when Mnangagwa eventually seized power.”

Gandawa, one of the brains behind the much-hyped science, technology, engineering and mathematics (STEM) thrust together with former minister and Zanu PF spin doctor, Jonathan Moyo, said he had not been “fired” from the ruling party.

“Contrary to claims, I was not expelled from Zanu PF but I expelled myself by standing as an independent at the 2018 election, where I ran a vigorous anti-Mnangagwa campaign.

“Indeed, Zanu PF lost the popular vote in both the Presidential and Parliamentary elections in Magunje,” he added.

Gandawa, who contested the 2018 elections where he lost, said he had not been involved nor had been implicated in human rights violations.

He fled the country into exile after the 2018 elections.