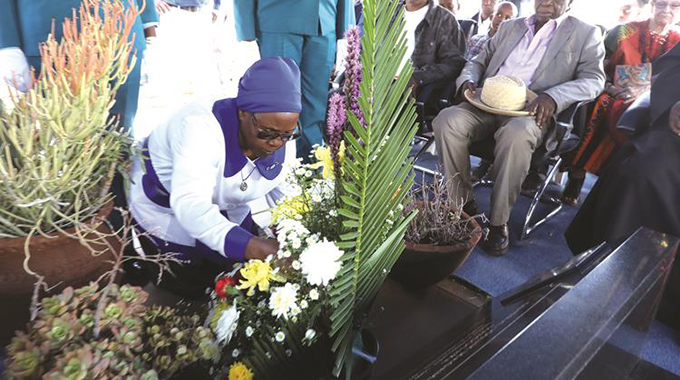 Senator Angeline Tongogara, the widow of former Zanla commander and national hero General Josiah Magama Tongogara, lays a wreath on his grave during the 40th anniversary of his death at the National Heroes’ Acre in Harare yesterday

This was said by chairman of the Josiah Magama Tongogara Legacy Foundation Professor Simbi Mubako at the National Heroes Acre yesterday during the 40th anniversary of his death.

Zanla was the military wing of ZANU (PF) during the protracted liberation struggle.

Gen Tongogara died on December 26, 1979 in a road accident in Mozambique, just before Independence.

Prof Mubako said he received the news of Gen Tongo’s death when he had just arrived in Lesotho.

“On the 27th (of December, 1979), we got the sad news that General Tongogara was no more. The one who broke the news to me was Cde (Stanislaus ) Mudenge who was lecturing in Lesotho at the time,” he said.

Prof Mubako said the late Zanla Chief of Defence had contributed to the struggle for independence in Zambia and Mozambique.

“He also fought for the independence of Mozambique. He would actually don Frelimo uniforms and fought alongside the Mozambicans and all that was to prepare Zanla to be allowed to go through Mozambique to start the war in the northeast (of Zimbabwe).

“This is the Pan-African legacy, which General Tongogara left us. He left us also a legacy of peace and unity. He was very much a man of peace and only fought in the war because of the intransigence of the Ian Smith regime.”

Prof Mubako said Gen Tongogara taught them about the importance of unity.

“As we look back on this day we commemorate the life of General Tongogara and celebrate his life,” he said.

“The country knows that without people like Tongogara we could still be fighting or we could have been defeated and what it means is Namibia could not have been independent by now and South Africa could not have overcome apartheid so we are celebrating a life of great achievement.”

Prof Mubako said Gen Tongo had also taught them of the supremacy of the party over individuals.

“General Tongogara left us certain goalposts of serving the country, serving the party (Zanu PF), as Zanla combatants would know that it was more important to toe the party line rather than individuals’. Individuals come and go,” he said.

“As Zimbabweans, we should be united and love one another and put the country first just like what my late father taught us,” he said.

Representative of Gen Tongo’s in-laws Mr David Gamanya said: “He left us a legacy of love, of seeking to see the progress of Zimbabwe and of good relations between the people of Zimbabwe.”