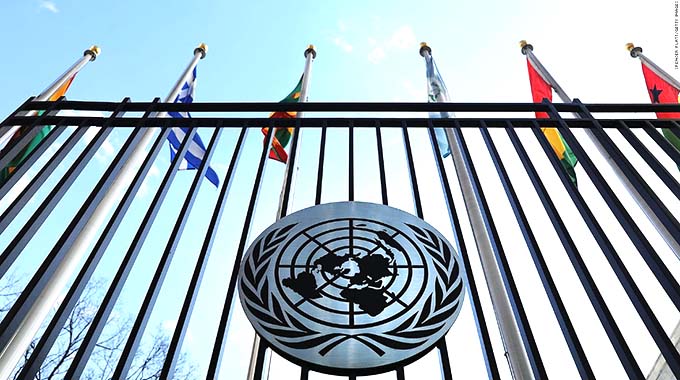 Nesia Mhaka Features Writer
Gender lies at the heart of the United Nations (UN) 2030 Agenda for Sustainable Development, which recognises that achieving gender equality is a matter of human rights, and is crucial to progress across all the goals and targets.

Linking gender equality with sustainable development is important as it is a moral and ethical imperative.

Ending all forms of discrimination against women and girls is not only a basic human right, but it also has a multiplier effect across all other development areas.

Achieving gender equity is critical to sustainable development. In all societies, women and men’s roles are socially constructed, but all too frequently gender-based disparities that disadvantage women exist.

The Zimbabwean Government and the United Nations (UN) family pledged to work towards full equality and empowerment of women with an aim to eradicate violence against women and girls, which resonates well with national Vision 2030 agenda.

“We are walking the talk in the Second Republic. We have committed ourselves to address national issues in a comprehensive manner, and no one shall be left behind as we boldly march towards realising our national Vision 2030,” she said.

“It will be foolhardy to believe that Vision 2030 will be realised without embracing the elimination of violence against women and girls as one of our key national development priorities,” she added.

Minister Nyoni said Spotlight Initiative is not only the largest singular investment on tackling gender-based violence in Zimbabwe, but it is also the most comprehensive.

She added that the programme avails a rare opportunity to introduce and adopt new innovations to tackle anti-social traditions and belief systems without relegating our social values of Hunhu/Ubuntu.

“The Initiative is a four-year joint programme (2019-2022) premised on the theory of change. We have changed our manner of doing business to effectively transform our society in a sustainable manner.

“It is humbling that Zimbabwe is among the eight African countries selected to benefit from this initiative. This demonstrates our success in engaging the international community that slowly, but surely is beginning to appreciate our vision as a nation.

“I sincerely hope that this significant intervention targeting the social cluster in our society is the beginning of a more comprehensive partnership scheme covering other clusters, particularly the economic one,” Minister Nyoni said.

Mr Parajuli said investing in people, especially women and girls is an investment for a sustainable socio-economic development fundamental in every society.

“Equal rights for men and women is at the very heart of fundamental human rights and United Nations values.

Mr Parajuli added that gender-based violence is rooted in a social construct of gender that is inculcated at a very early age, and is often built upon unequal power relations and unjust attitudes, leading to violent behaviours.

He said education and fulfilling employment will show the way. Quality education systems that deepen knowledge bases in women and girls promote a sense of self and expands life skills, thus, opening their minds to a world of mutual respect, learning and self-worth.

“Experiencing gender-based violence limits women and girls’ potential to make decisions over their lives, pursue education, provide for themselves and their families and actively participate in their communities,” intoned Mr Parajuli.

The Spotlight Initiative tackles head-on sexual gender-based violence by paving the way for women and girls to articulate their voices, make informed decisions on broader life issues, education, and career opportunities that make it possible for them to provide for themselves and their families. The initiative also gives them the confidence to actively participate towards the development of their communities.

Therefore, addressing violence against women and girls is vital for achieving and sustaining development progress in Zimbabwe. Violence is a complex issue, with drivers that are deeply embedded and reinforced by social norms.

Gender-based violence is not an integral part of Zimbabwean culture that is why particular aspects of the Spotlight Initiative, which aim to heighten the understanding of harmful social norms and how they can be redressed, are commendable.

In concurrence with Minister Nyoni, Mr Parajuli said Spotlight Initiative does not only tackle gender-based violence in Zimbabwe, but it also comprehensively addresses issues around the vice.

“The Spotlight Initiative will build and support the development of a national strategy on gender-based violence, including sexual harassment, which can then facilitate the establishment and strengthening of reporting mechanisms to enable survivors to seek protection and services,” he said.

Mr Parajuli added that ending violence against women and girls requires commitment at all societal levels.

“We all must appreciate gender-based violence is a serious violation of basic human rights, dignity and leaves a life-long scar on the life of the survivor. Equally, it has huge health and economic costs not only to the victim, but also to the family, community and the country in general.

“We must endeavour to ensure a zero tolerance in all public and private spaces; and let’s shine a light on ending this scourge in Zimbabwe and across the world,” he said.

The cross-cutting issues of gender, environment and climate change need to be addressed simultaneously to advance sustainable development in line with the Sustainable Development Agenda 2030, if existing inequalities are to be curbed.

A common challenge in tackling cross-cutting issues, however, is ensuring that they are prioritised and implemented through national and district policies and budgets.