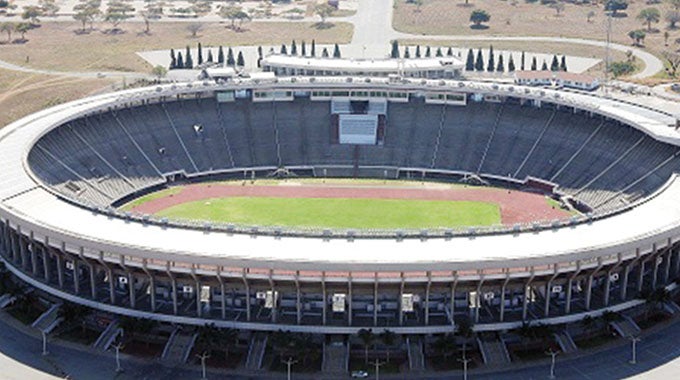 The match, scheduled for November 16, had originally been set for a venue outside this country after CAF banned the country’s major stadia from hosting high-profile international matches.

The giant stadium had been condemned for its uneven turf, unsuitable turnstiles, lack of bucket seats, poor changing rooms, doping rooms, first aid rooms, the absence of a media tribune as well as poor ablution facilities.

However, a lot of work has been done to address the issues, except the installation of bucket seats, a process which was stalled by complications related to their procurement, during Covid-19 lockdowns, in source countries.

The Government have since resorted to try and secure the bucket seats from local suppliers but, given the AFCON qualifiers will be played in empty stadia, CAF could not use this as an excuse to bar the giant stadium from hosting next month’s matches.

And, with countries still having some restrictions, when it comes to foreigners entering their territory, CAF could also have found themselves in a fix, to try and force the Warriors to play their AFCON qualifier, on neutral soil.

Youth, Sport, Arts and Culture Minister, Kirsty Coventry, was confident, recently, that there was a very good chance the ban on the National Sports Stadium would be lifted.

“Our national stadiums have been renovated, that is the National Sports Stadium and Barbourfields,’’ she told the Senate recently.

“We are only left with two outstanding issues at the National Stadium, that is the procurement of the buffet seats and the electronic ticketing, which is now being procured through the tendering process.

“This past weekend, there was an inspection team that visited the two stadiums, Barbourfields in Bulawayo and the National Sports Stadium.

“They are the inspection team that writes the report on behalf of Zimbabwe that they then send to CAF.

“Once they have shared that document with me, we will attach the letters of two outstanding procurements, the buffet seating and the electronic ticketing, which we will send to CAF for it to make the decisions.

“At the moment, it is looking very positive to have our national team playing (at home), the grounds are looking very good in terms of all the other aspects that CAF had wanted upgraded, including the lighting, the changing rooms, the medical room etcetera.”

“We will continue with the work we have been doing. Bucket seats and turnstiles are the major issues, which we need to deal with at the moment,’’ he said.

“We are happy that CAF have given us that reprieve to host Algeria at home next month.

“We will continue improving the stadium until it meets CAF standards. We were affected by Covid-19 but we are on course.”

ZIFA First Instance Board chairman, Piraishe Mabhena, implored stakeholders to keep the foot on the pedal and continue addressing flaws at the National Sports Stadium and other major stadia.

“As the ZIFA First Instance Board, we have not yet received official confirmation from CAF on the homologation of the National Sports Stadium,” said Mabhena.

“Normally CAF release fixtures, a month before the matches, to allow for proper logistical preparations and I would like to believe that we have been given a temporary reprieve to host our match against Algeria at home.

“From our last engagement with CAF, I know we might have benefitted from the fact that most of the work at the stadium, which was flagged by CAF inspectors, has been done.

“But, the bucket seats issue is still pending and, also, the turnstiles, which deal with the safety of spectators.

“I think, in the interim, CAF might have just considered the fact that there are no fans attending this match in question and they decided to let the stadium host the match as there is little to worry about in terms of crowd control.

“There are no bucket seats at the stadium yet but, again, there will also be no fans for this match, so, it’s not really an issue. So, while we await official confirmation from CAF, we would like to believe that those are some of the reasons the stadium has been given the greenlight to host this match.

“The fact that the match has been confirmed, with the National Sports Stadium being the host, implies that we have really been spared the logistical difficulties to host the match on neutral soil.”

He said while it is good that the Warriors will play their match against Algeria at home, stakeholders should move with speed to address flaws pointed out by CAF.

“However, all stakeholders involved in the renovations of the stadium should not get complacent as this might be only a temporary homologation given to the stadium by CAF after considering those logistical issues I have already mentioned,’’ he said.

“We need to put ourselves under pressure and utilise the grace period which CAF appear to have given us.

“Of course, we have covered significant ground, in the upgrading of this facility but we certainly need to do more.

“Now that travel restrictions are easing, I hope we will be able to move with speed and upgrade the venue to CAF expectations.”

Zifa spokesperson, Xolisani Gwesela, who is also a member of the FIB, said they had written to CAF requesting a temporary reprieve to use the National Sports Stadium for the match against Algeria.

“We are yet to receive communication from CAF regarding the venue. They will write to us. Remember we submitted our request to use the venue last month and also a letter regarding the state of affairs,” said Gwesela.