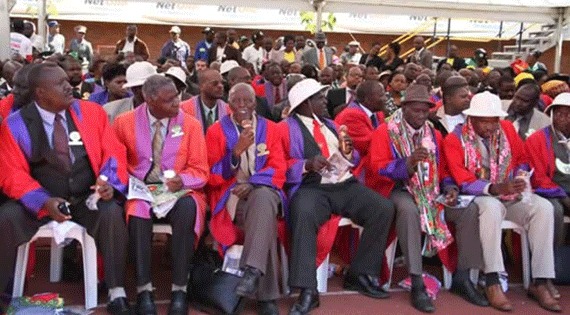 AT least 32 traditional leaders from Matabeleland South province recently petitioned government to prioritise students from the region during enrolment at teachers’ training colleges in Bulawayo and Gwanda, beginning this year.

Matabeleland South provincial chiefs’ council chairman Chief, Vezi Maduna wrote to Rugeje on February 19, 2018 requesting that qualified aspiring teachers from the region be given priority during enrolment at tertiary education institutions located in the province.

“On behalf of my delegation that met you on December 1 2017, in our meeting we raised the issues of vacancies allocation at the United College of Education [Joshua Mqabuko Nkomo Polytechnic and Hillside College]. Now the institution has advertised, as traditional leaders from Matabeleland, we propose that out of 600 vacancies 410 should be allocated to us the traditional leadership in the following way 10 vacancies per chief multiplied by 41 chiefs,” Maduna wrote.

Two months ago, Sibanda wrote to the United College of Education and Hillside Teachers’ College in Bulawayo directing them to consider the chiefs’ request.

“The chiefs from Matabeleland wrote a formal request to the national political commissar asking for facilitation of their qualified subjects to get vacancies in your college. The request was as follows, 10 vacancies per chief which is 10 vacancies times 32 chiefs equals to 310. After going through their request, the national commissar approached the Minister of Higher and Tertiary Education to consider the chiefs’ request. We are informed they will use the following criteria, first preference child-headed families, second preference widows, widowers’ poor headed families and thirdly those living with disabilities and marginalized groups. We kindly request that you discuss this request with the secretary of chiefs, Nothiwani Dlodlo,” part of Sibanda’s directive read.

Yesterday, Dlodlo confirmed the development and expressed hope that the chiefs’ request would be granted.