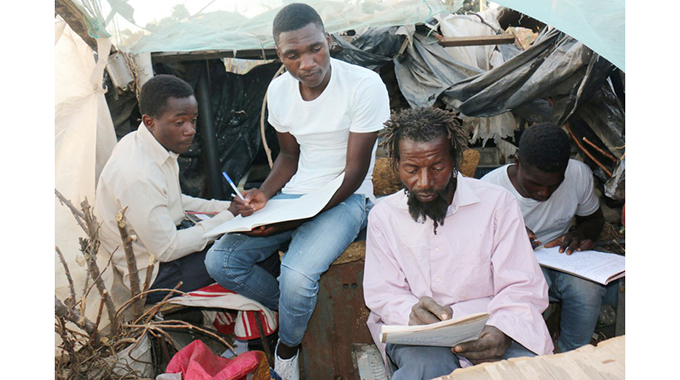 There is a valley situated about 13km to the south-west of Harare which prides itself in being home to talent cutting across the whole gamut of human endeavour. Colonial governments named this locale Glen Norah, and Independence has since baptised it.

This glen has never been short of renewal batteries, as wonder upon wonder has been known to issue from its belly time and again. From the hood, musicians, sportspersons, scribes, captains of industry, models, actors/actresses, lawyers and magistrates; you name it, announced with gargantuan strides their arrival in their chosen shades of the stars, putting Glen Norah in the limelight over the years.

However, as they say wonders never cease to amaze, Glen Norah has done it again. This time through an intellectual phenomenon, and as the contemporary recorder of history, The Herald could not let this wonder go unnoticed.

It is around 11am as The Herald crew arrives at a pole, rags and cardboard dwelling less than 500 metres to the south of Chitubu Shopping Centre, close to the    Anglican Church, which is said to be home to the wonder of our time.

The eerie atmosphere engulfing the sagging ramshackle abode takes the crew aback. To advance, or not to advance becomes the question as history attempts to flee in the wake of fear and hesitation.

But good stories are meant to be like that: hair-raising. Camera in hand, microphone at the ready, the crew goes for the jugular in case the phenomenon flees out of sight.

With passers-by getting excited, a cobbler by the roadside comes to the rescue and volunteers to mediate. By and by the good worker of burdened shoes engages the ‘man of the house’ who on first sight passes for everything else but not decency: in demeanour and apparel.

His thirsty clothes are tattered, and his unkempt hair betrays a long forsaken relationship with both soap and the comb.

He momentarily appears, then disappears behind the poles, rags, plastics, cardboard and whatnot. Within a flicker adrenaline floods the reporter’s body again, almost choking her. It is a moment of hesitation coupled with fear-induced patience.

Then, the man reappears. This time clad in a different set of apparel, much to the crew’s relief. Looks, indeed, are deceiving.

The wonder of The Herald’s visit, as the crew soon learns, is Patrick Matandirotya, a graduate of the University of Zimbabwe, who has earned the moniker Professor for producing A-class students in whatever subject they bring to him for whatever examination board.

Those who pass through his hands are guaranteed of flying colours, notwithstanding his demeanour, which to some may be linked to both the physical and metaphysical miasmas of human existence.

Most of his protégés are enrolled at various universities across the country.

Debunking the notion held by most people who come in contact with him, basing on first appearance, that he might be bonkers, Matandirotya says:

“I am not crazy as some people think. I am rehabilitating learners, because this is an academic clinic where pupils are empowered academically.

“People used to call me names, like Mr Pomona, and such like. I take more than ten subjects. I teach History, English Language, Geography, Science, Commerce, Biology, Shona, Family and Religious Studies (area of speciality), Heritage Studies and Agriculture.”

Exposing a diastema in his upper teeth, the intellectual wonder says his mission is to improve the academic performance of people in his community.

The community-proclaimed Professor, who used to teach Social Studies in Botswana, vows to always strive for excellence to complement Government’s efforts to improve the quality of education, regardless of what people say or think about him.

To that end, he appeals to the Government to provide him with decent accommodation and a proper place to conduct lessons, since some people may doubt him due to the nature of his ‘classroom’ and dwelling place.

A holder of a Bachelor’s degree in Religious Studies from the University of Zimbabwe, Matandirotya teaches across disciplines from primary school up to A-Level.

He does not need a textbook either. He simply flows and glides from one subject area to another.

Appearances notwithstanding, scores of his former charges and their parents testify to his intellectual prowess heaping praises on his lap.

Mr Normius Mutasa, one of the parents, and a resident of Glen Norah speaks glowingly of Professor’s natural intelligence, and grasp of detail, saying he needs to be uplifted to enable him to discharge his duties to the community from a decent place.

Another parent, Mr Charles Chipunza weighs in, saying Professor has helped their children pass examinations, which does not constitute insanity in his view.

“If he is insane it means his degree is invalid. He is promoting our community in terms of education.  He is doing great, and no one can deny that. We all stand to benefit from this man,” says Mr Chipunza.

Mrs Benhilder Madaka could not hide her excitement, elucidating that  Professor is the greatest teacher she has ever known, as he mentored her child to an 11-points haul at Advanced-Level.

Jenipher Musaniwa, one of Professor’s pupils showers plaudits on him for helping her to flying colours.

Another pupil, Charmaine Chiutari added weight on the praises for having been mentored to greater success in her Ordinary Level examinations.

“We grew up together in Mutekedza, Chivhu. To me my brother is a normal person who works to uplift the economy of Zimbabwe. However, relatives also doubt his sanity because of where he lives,” Mr Matandirotya reveals.

Professor says his wife is a police officer, and the couple has three children. The eldest child, who is 21, works in the transport industry. However, he does not stay with them.

Much to the surprise of the reporter, Professor says while he sleeps, eight angels and the spirit of Chaminuka keep guard over him

“The spirit of Chaminuka does not want me to engage in sexual intercourse. That is why I do not stay with my wife,” he says.

Since Professor does not always charge for his services, he is also into recycling of plastics, paper and scrap metal; and sells seedlings for a living.