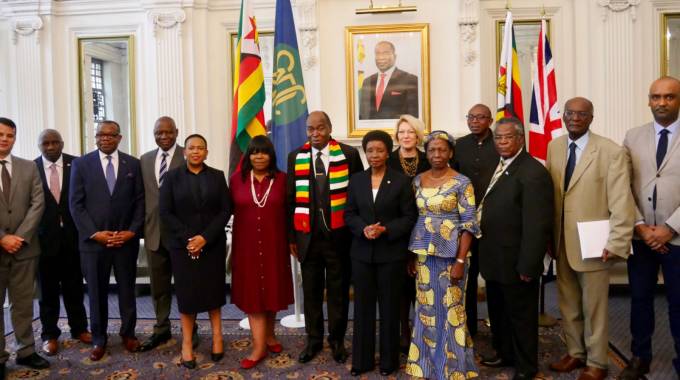 The push to remove sanctions imposed on Zimbabwe by the West is gaining traction after the African Union (AU), China, Japan and Sadc diplomats around the world lent their voice for the embargo to be lifted.

AU Commission chairperson Mr Moussa Faki on Friday added diplomatic heft to Sadc’s efforts by calling for the “immediate removal” of the sanctions.

In addition to setting aside October 25 as the day to protest against the embargo, Sadc also resolved at the 39th Ordinary Summit of the Heads of State and Government in Tanzania in August to escalate the issue with the continental body.

The AU has since obliged.

“The chairperson of the African Union Commission, Moussa Faki, calls for the immediate removal of sanctions imposed on the Republic of Zimbabwe in continuity of his call during his visit to Zimbabwe from 18-20 February 2018, and in support of today’s communiqué of the Southern African Development Community (Sadc) on this issue,” said Mr Faki in a statement issued by his spokesperson Ebba Kalondo.

“The chairperson reiterates his concerns that the persistence of economic sanctions imposed by the international community continue to have negative impact on the economy and the people of Zimbabwe. In this regard, he expressed his determination and that of the various relevant organs of the Union to continue to mobilise support for the country’s recovery efforts,” he said.

He also commended Government for its continued effort to create a conducive environment for economic growth.

The AU, he added, will continue to support “the country’s road to peace and prosperity for all its citizens”.

China’s Ministry of Foreign Affairs similarly said the sanctions have buffeted the local economy and made life difficult for Zimbabweans.

“China believes that the long term and unilateral sanctions imposed on Zimbabwe by some countries and organisations are not based on international law and they lack legitimacy and legality,” observed the ministry.

“Instead of solving any problems, sanctions and pressure only pushed Zimbabwe’s economy into a slump and made life difficult for its people.”

“In fact Zimbabwe and other African countries voiced on multiple occasions, including at the UN, their strong appeal for the lifting of the sanctions.”

The rising superpower’s embassy in Harare also added its voice to the lobby.

Regional body, Sadc, waged an aggressive lobby led by Tanzania, which is the current chair.

In a statement, Tanzania’s Ministry of Foreign Affairs said “the meeting was successful as Malaysia promised to stand against illegitimate sanctions”.

Tanzania also hosted an event in the United Kingdom in solidarity with the call to lift the embargo.

Speaking at the dinner gala held on Friday, Zimbabwe’s chief envoy to the United Kingdom Ambassador Christian Katsande said Zimbabwe was grateful for the support from Sadc countries.

“We are grateful that because of the solidarity and support, political and material, from our sister countries in the region and beyond, we have survived.

“My country applauds the Southern African Development Community, the African Union and all who stand with us in demanding the immediate and unconditional removal of these illegal sanctions. Those that imposed illegal sanctions must heed this call and lift them now. Cooperation is a win-win game. Sanctions are a lose-lose game. Surely, Zimbabwe deserves a restart,” he said.

It is also understood that Japan and South Korea are also supporting Harare.

Information, Publicity and Broadcasting Services Permanent Secretary Mr Nick Mangwana said the momentum that has been generated by the ongoing anti-sanctions crusade was huge.

“The momentum is huge,” he said.

“To have a G7 country supporting us is just great. In terms of Japan, it is the re-engagement agenda that has made breakthroughs because when we did the programme, the Japanese wanted to give a solidarity message.”

First Secretary at the Embassy of Japan in Zimbabwe Mr Yoichiro Takahashi told The Sunday Mail that they would issue a statement.

“What is important is that Japan has no sanctions against Zimbabwe. We are going to issue (a statement) when the Deputy Ambassador (Mr Kenichi Kasahara) is back in the office,” he said.

Sadc’s Anti-Sanctions Solidarity Day, Mr Mangwana said, he had inserted the subject of sanctions in the global domain.

Mr Mangwana added: “I have heard some people saying on the 26th (of October) the sanctions will remain. That is not the idea: the idea is the conversation, and you saw how effective this has been.

“As a nation and a people, we say thank you Sadc for standing by us and for speaking with one voice at the 74th Session of the UN General Assembly. We also say, thank you to the African Union and the progressive world for supporting us during these difficult years in the history of the country.”

In an avalanche of tweets on Friday, the US embassy in Harare sought to explain away the Zimbabwe Democracy and Economic Recovery Act (ZDERA) as only targeted on individuals and entities, which made it impossible for them to materially affect the local economy.

Washington also added State Security Minister Owen Ncube to the sanctions list on Friday ostensibly for his “involvement in a gross violation of human rights in Zimbabwe”.