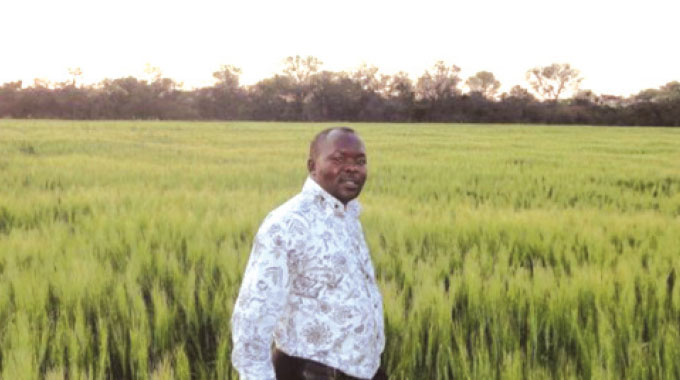 NWCFC original target was to mobilise inputs and machinery for the production of at least 150 000 tonnes of wheat valued at approximately $80 million.

Earlier last month the association hatched a plan to stimulate and expand contract wheat farming in all districts of the country through attraction of new local and international investors for the next three years.

“We have been looking very closely over the last few weeks at what water is available for irrigation for the winter crop this year and it is anticipated to generate a minimum of 90 000 tonnes reasonably good quality wheat for harvest in October-November 2019.

“We appreciate that this tonnage is below the national requirement but we are trying very hard to substitute imports,” Mr Murdoch said.

However, NWCFC says the key contractors involved in the programme are ready to cultivate a minimum of 15 000 hectares

Mr Murdoch said, “Three major contractors involved are prepared to commit to a minimum of 15 000 hectares to the wheat programme this year.”

The Initiative is being rolled out at a time when the agriculture ministry is considering to increase wheat hectarage from the previous 43 000 hectares to ensure self-sufficiency and reduce grains import bill.

Zimbabwe requires at least 450 000 tonnes of wheat per year to meet the national bread requirements of nearly a million loaves per day.

Present at the convention was Lands, Agriculture, Water, Climate and Rural Resettlement permanent secretary Ringson Chitsiko, who acknowledged that Public Private Partnership was central in the progression of the grain sector and realisation of sufficient winter wheat produce in the long run.

“When you talk about private sector and government as separate entities, that’s a bit unsettling to me because that is no longer the paradigm, the paradigm is us, Public Private Partnership.

“Government should only be a facilitator, you dictate of what needs to be done,” Mr Chitsiko alluded.

Apart from Zimbabwe’s (Southern Africa) El Nino induced drought,  impacts of climate change have been felt across the globe, heat waves in the northern hemisphere have caused wheat yields to come down triggering an increase in global wheat prices as a result of low supply.