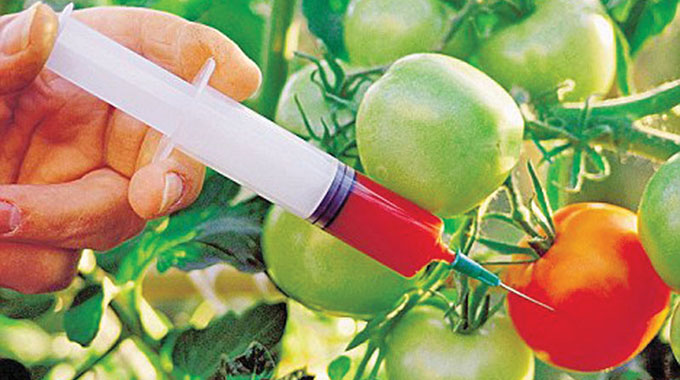 Jeffrey Gogo Climate Story
A recent hard news article by The Sunday Mail, “No To GMOs, Position Unchanged,” presents common arguments on why the State should allow the growing of genetically-modified crops (GMOs).

Underlying the arguments is an assumption: genetically-modified crops can provide the necessary wherewithal to boost food output, end hunger and increase exports.

The arguments and the assumption of the article, as presented by proponents of the GMO movement from the National Biotechnology Authority (NBA) and the Cotton Producers and Marketers Association (CPMA) are the opposite of what is true.

The assumption is the most important aspect of the position of the two entities.

However, because the arguments rest so heavily upon it that they are almost offered as self-evident assertions. If you buy the presumption, you’ve bought the conclusions.

In the article, Dexter Savadye, chief executive officer of the NBA, opens with a nod to the idea that “it is the right time to adopt these GMOs,” because, according to him, “of the state of national food security as well as to improve better yields (sic).”

Another nod goes to countries like South Africa and Botswana, which already consume GMOs.

So, Zimbabwe “must not be left behind”- or forever be doomed to the dustbins of history, stalked by hunger and starvation at a time of recurrent droughts triggered by climate change.

The acknowledgements are cursory and dismissive to both science and the State’s position barring GMOs.

It is common knowledge that there is no baseline data on the safety of genetically-modified crops to the environment and human health in most African countries of the east and south, hence no foundation for the assessment of food and feed safety.

When considered against the fact that millions of Zimbabweans remain ill-informed about the health impact of GMOs, it almost becomes clear that State policy against such crops and foods is more of a moral issue than it is scientific.

The National Biotechnology Authority itself does not provide any compelling scientific evidence on the matter, save for anecdotes.

But Savadye moves on quickly.

“Actually, we (Zimbabweans) are already consuming the GMOs,” so “it is ideal to start engaging now,” ostensibly to embrace what to him would be undoubtedly reasonable and responsible regulation.

The conclusion of this debate between GMO crops and Government control is apparently foregone.

This means the debate will be limited to what type of regulation should be imposed.

Moreover, Savadye’s statement contains an odd leap of logic: it argues that because two of Zimbabwe’s neighbours are eating GMOs, then Zimbabweans should consume such foods also — or risk being left behind.

Eating habits, good or bad, should not necessarily be established by authority; they are a natural result of the cumulative choices and exchanges of individuals. Without adequate labelling of foods with traces of GMO, Zimbabweans have never been granted that choice. Indeed, if GMOs serve individuals, then liberty should reign.

He does not consider the potential environmental hazards from GMO crops, which in turn will likely fuel the cycle of climate change into a vicious one. Or that genetically modified crops, despite their solve-it-all tagline, could fail.

For example, in 2013, Australian farmers found problems with a GM Round-up Ready canola, which failed to germinate properly, and asked for compensation.

Round-up is the most commonly used herbicide worldwide.

Most GMOs are engineered to carry the herbicide.

Research has shown that pests become resistant to the GMO maize variety by the third year of cultivation.

The conclusion toward which the Sunday Mail article had been driving now arrives. “This position (anti-GMO policy) has to be reviewed,” Stewart Mubonderi, who heads the Cotton Producers and Marketers Association, demanded.

“GMOs will enable local farmers to produce more, even enough to export so that the country earns the much needed foreign currency,” he told the paper.

The contours will probably include prominent multi-nationals like Monsanto, Syngenta and Dow Chemical, the biggest manufacturers of genetically modified seed, and even Zimbabwe’s cotton seed maker Quton, which sold its soul to the devil a few years ago after it was bought by the Indian subsidiary of Monsanto, Mahyco.

To pause for a second: big, profit-driven multi-national GM companies are the type of problem against whose control small farmers in Africa have been trying to rebel: their policies having centralised seed breeding, taking away centuries of home-based seed independence from the African subsistence farmer.

In India, suicide rates involving highly indebted small farmers, particularly contract GM cotton farmers, have gone through the roof while farmers in Pakistan are seeing bollworms increasingly becoming resistant to Bt cotton, a seed variety created by its manufacturers supposedly to fight against such pests.

Genetically modified crops, not organic crops, present the greatest risk of failure, environmental hazard, and to human health when measured against experiences from other countries where scientific research has validated such positions and lawsuits won against seed companies.

Seed sovereignty, environmental protection and human health are not the purpose of Savadye and Mubonderi’s argument, however.

The duo’s intent is to champion the extreme centralisation of seed breeding into the hands of the same trusted third parties that have ravaged the wealth of communities over and over again.

But, ultimately, there can be no honest debate over how much control to assert over farmers, consumers and their wealth and eating habits.

There can be no ethical debate about how best or how much to steal through centralised genetically modified crops, sold to all as the panacea to food shortages – or a healthier alternative.