Golden heart of a motherly father 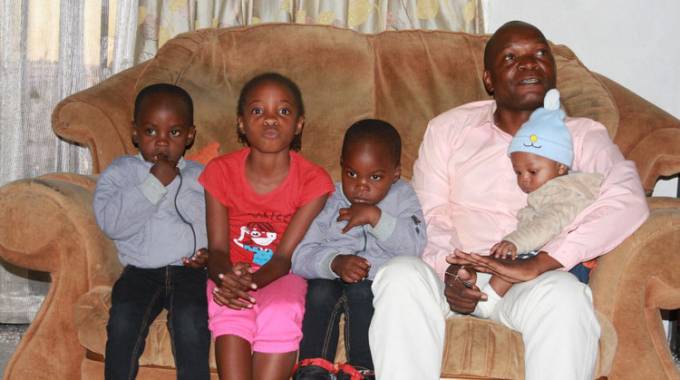 Upon disembarking from his vehicle, Chamunorwa Gadziso is immediately greeted by two youngsters who dash towards him, arms outstretched.

The jubilant four-year-old twins fail to hide their excitement and cling to his trousers whilst giggling uncontrollably.

“This is how I am welcomed home every day,” he says as he hugs his twin sons.

His, however, has not been a rosy tale of fatherhood, as for four years he has been going to work, going grocery shopping, changing diapers and going for school consultations single-handedly, following the death of his wife in 2016.

“Raising children is one of those things in life that do not come with a manual or a prepared script. However, it becomes more complicated and difficult when a partner dies and leaves five-month-old twins in your care,” he told The Sunday Mail at his home in Chitungwiza.

His voice quivers and he continually stares up as tears well up in his eyes.

“I could not understand how and why it had happened. I used to attend funerals and mostly preachers would read from the book of Job 14 verse 1 and during those times I understood that death was part of life,” he continues.

“However, when my wife died, I remember browsing through the Bible to find the perfect verse which would console me at that particular moment. Life suddenly became meaningless. I did not know what to do, especially with these young children.”

For Gadziso (44), he had been surrounded by both his parents and 10 siblings for most of his adult life. When he got married in 2002 to his late wife Lillian, Gadziso thought his life was now complete.

But one November morning in 2016, his life came crashing down: Lilian collapsed at a local gym and died at Chitungwiza Central Hospital. And life immediately changed for the young family.

Gadziso, an environmentalist at a local company in Harare, had to quickly learn to be both a father and mother for his young children. It meant he no longer had the liberty to watch a football match on a Sunday or have casual talk with his friends.

“It was not easy at the beginning. I was now earning the money, doing the budgeting and buying everything from tomatoes to the children’s diapers,” he said.

“My day began around 6am. I had to monitor my children before leaving for work and I also had to rush home at the end of the day to ensure that I spent time with them before they went to bed. The twins were only five-months-old when my wife died, so I introduced baby milk immediately.

“I was fortunate that they did not react to (the) formula.”

Being unable to handle the house chores on his own, Gadziso decided to engage the services of maids. But he unhappily discovered that not every maid appreciated having a male supervisor.

“I had few incidents where I faced challenges with the maids. I remember a time when a maid quit unexpectedly,” he said.

“Maybe she, too, was overwhelmed by the situation or maybe she was used to working with female bosses. There were three young children who needed care and she quit her job.

“I did not know what to do with the twins. I had to skip work a couple of days so that I could look after them while I looked for a maid.”

“I came up with a schedule which saw me spending more time with my children,” he added.

“Of course I hired maids, but I did not want them to take my place. I made a decision to arrive home around 5 pm every day to make sure that the children had taken their baths, taken meals and basically following up on the house chores.

“The time was also difficult as relatives and friends distanced themselves. I do not know if it was because they, too, were grieving or they were afraid of the burden. However, this made me a strong and independent person.

“For me, it was a blessing in disguise because I created a strong bond with my children.”

But he knew his biggest task was to mould his children and influence the way they viewed themselves, their self-confidence and help them navigate through life’s challenges.

“With the eldest son, who is now doing Form Three at Wise Owl, it was not that difficult since he knew what death meant,” he explained.

“It took her some time to understand but I told her that I was not going anywhere. It somehow made her secure and it cemented our relationship. I explained how some families had two parents, others had one parent while others had no parents at all. I think it made sense when I explained. Communication is a culture that I have decided to continue with my children.”

Gadziso re-married in January to Margret Masando and were blessed with a son, Tavonga. Gadziso reckons  re-marrying was for the benefit of his children.

“I do not think there is anything that will ever break the bond I have created with my children over the years,” he said.

“I remarried because I felt my children needed it. I felt I needed it too. I told her that you have come to complete this family and not to compete with anyone.

“I told her that what I had were just children who need love and care as much as she needs it. As my daughter grows up, I feel there are things that she will not be able to tell me, but I hope she will be able to tell them to Margret.”

As the world celebrates Fathers’ Day today, Gadziso’s advice to all fathers is to be responsible.

“Growing up we were told that children were raised by their mothers, however the times we are are living in have changed,” he said.

“As fathers, we need to be more involved in our children’s lives. We need to be responsible fathers.”