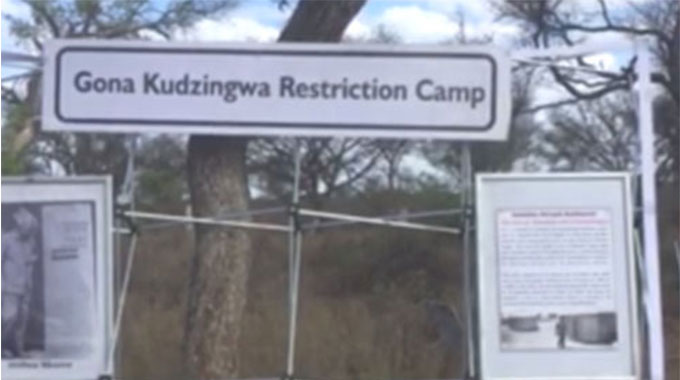 Vincent Gono, Features Editor
THE history of the liberation struggle and that of the sons and daughters of the soil that executed it and bought the country independence at the expensive cost of their lives, blood, tears and sweat can never be complete without mention of detention camps such as the notorious Gonakudzingwa.

The detention camp that was situated in the Gonarezhou National Park in Chiredzi district of Masvingo Province was as the name depicts – an area where those that were deemed unfit to live in the society where white rule dominated were banished. It was the equivalent of the Robben Island of Apartheid South Africa where Nelson Mandela was also banished.

Those that were kept in the camp were regarded as purveyors of a deadly contagious disease that was unwelcome to the colonial regime as they threatened its existence and all that it stood for and they were quarantined from others.

The camp remains one of the most outstanding areas from where the story of political detainees, the execution of the liberation struggle and the country’s independence could be told and the National Museums and Monuments of Zimbabwe (NMMZ) said it had finished the feasibility studies and it’s reconstruction as a national museum was already under way after the area was cleared of landmines by the Zimbabwe National Army.

In a recent interview, NMMZ director Dr Godfrey Mahachi said they were happy that all documentation was now in place and they were only waiting for the camp to be gazetted a national museum.

He said the major handicap was that the area was infested with of landmines but said they got official communication from the army that the area had been cleared of the landmines some time last year and they quickly moved in to carry out the work of turning it into a national museum so that all work would be guided by the NMMZ Act.

The intention according to him is to create a theme park — a recreation of the camp or some sections of it to give visitors some appreciation of what restriction and detention camps were like.

“Our aim is to reconstruct some of the structures and to then interpret the camp life from different perspectives, political, social in relation to the experiences of the camp inmates and the impacts of the entire system not only on the families of the affected inmates but also on the national political development that then ensued, leading to the decisions by the liberation movements to go for the armed struggle. A theme park therefore recreates and also interprets the site to enable visitors to understand the values of the heritage site,” said Dr Mahachi.

He said the information was there and they were already generating more from research on site. His department, he said, would conduct archaeological as well as oral interviews with both surviving inmates and the local communities that were more directly impacted by the establishment of the camp.

Gonakudzingwa in Chiredzi District of Masvingo Province was established by the white regime in April 1964 after WhaWha in Gweru was set up in February of the same year and later Sikombela in Gokwe South District in Midlands Province in June 1965 for purposes of curtailing the nationalist movements that were growing in the early to mid-1960s.

The three detention camps were constructed as a quick response to the growing number of African nationalists who felt the need to fight the repressive white regime. There were striking similarities in the geographical location of the three detention camps. Apart from providing punitive accommodation to the black nationalists, the camps were established in the remote, inaccessible parts of the country.

The detention camp was located within the expansive wildlife zone of Gonarezhou, an area that was and is still famed for being home to big fauna such as elephants, buffalos, lions and rhinos.

According to Munyaradzi B Munochiveyi in his book Prisoners of Rhodesia — Inmates and Detainees in the Struggle for Zimbabwe Liberation 1960-1980, by any measure Gonakudzingwa was unattractive for human habitation.

Temperatures could sour to peaks of 118 Degrees Celsius. The area was exceptionally dry. It had an altitude of 1 000 feet and consequently hotter than the rest of the country. Malaria was endemic in the region.

Because of its geographical location that was made worse by its arid conditions the detainees believed and accepted that it was more of a deliberate ploy by the Rhodesian authorities to make them suffer in the camp than just a matter of mere accident or coincidence.

And true, the belief was that after experiencing a torturous life at Gonakudzingwa, the leaders were going to be deterred and go back to influence their black constituencies against rising up against the white minority rule. The late Father Zimbabwe Cde Joshua Nkomo noted in his autobiography with a deep sense of humour how his colleagues and friends Cde Msika and Cde Stanislas Marembo had developed a habit of taking an early morning walk around the detention camp.

He wrote, “One morning they met a lion, a big male on the path and they came flying home. “The animals (that lived around Gonakudzingwa) were dangerous but not hostile by intent . . . it was their jungle, not ours. But nobody was going to escape while they were around.”

Munochiveyi further noted the experience of detained political activist Victor Kuretu during his first days at the detention camp.

He had this to say, “When I first got to Gonakudzingwa, I remember wondering whether we were still in the same country or not. The place was unbearably hot and we used to pass blackish sweat during the first days. The water there was not good. When we boiled the water we would remove some whitish residue which looked like lime mineral. We had problems with wild animals at Gonakudzingwa because it was located in Gonarezhou wildlife reserve. At night and early morning, lions would roar very loudly. We also saw elephants roaming near the camp.”

The camp was therefore deliberately set in an animal area to ensure that even with no security whatsoever, no one was going to attempt to escape. And yes, there was no security at the camp for escaping was just like jumping from the frying pan into the fire. The detainees were convinced that the authorities knew that no one would dare attempt to escape because the lions and elephants made sure they would not run away.

And with the aggressive animals, they knew that they would not be worried about supervision and security and to synthesise that argument the only supervision was from a little frontier police post on the Rhodesia/Mozambique railway line called Villa Salazar.

Detention camps of Gonakudzingwa’s nature were therefore established to halt any liberation movement’s pursuits at freeing the country from the tight grip of the oppressive Smith regime and they were in essence torture and brutality centres.

Dr Mahachi highlighted that although the makeshift structures that Gonakudzingwa were no longer erect, efforts were in place to make the detention camp a historical monument from where the political history of the country could be told.

He said the challenge was that the architecture of Gonakudzingwa was not like that of Sikombela in that Gonakudzingwa was more of a makeshift structure that was erected on a concrete slab. There were metal structures and rondavels which had no permanence.

“People need to understand the architecture of Gonakudzingwa. It was not a permanent structure but a kind of makeshift one. We therefore do not have anything monumental, it is the same with Sikombela, there are no structures to talk of but we have done all the work at Sikombela and wish to do so at Gonakudzingwa. With Sikombela we have finished the comprehensive survey and we wish to do that with Gonakudzingwa too but we are waiting for the area to be cleared of landmines,” said Dr Mahachi.

He said he was pleased with the work so far saying everything was in order to make the notorious detention camp a national site from where the country’s liberation struggle and independence history could be told.