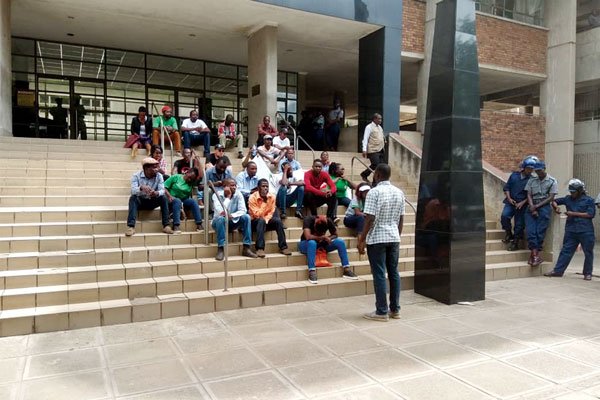 A DISGRUNTLED Gokwe teacher was arrested at the weekend after he allegedly confronted Primary and Secondary Education minister Paul Mavima and told him off that he was contributing to his misery through underpayment.

Mavima, who is Gokwe South MP (Zanu PF), was in the constituency visiting various party structures and supervising some of his community projects.

A police source in Gokwe South said the suspect, Stephen Mangoma, of Mateta High School, allegedly confronted Mavima in a bar on Friday, accusing him of impoverishing teachers.

According to the source, Mangoma said: “I hate you minister. You are responsible for our suffering and I hate Zanu PF.”

Mavima’s aides reportedly shielded and escorted the minister to his vehicle before they returned and repeatedly slapped Mangoma.

The following morning, police in Mateta tracked down Mangoma and arrested him at his school, more than 100km from Gokwe growth point.

The accused’s relative, who refused to be named, confirmed that the outspoken teacher was likely to be taken to court today on charges of disorderly conduct.

Midlands provincial police spokesperson Inspector Joel Goko yesterday said he had not yet been briefed about the issue.

“It is ridiculous and purely harassment of teachers who decide to challenge the authority for not taking care of their needs,” he said. “The government of Zanu PF is failing to provide our needs as teachers and when we ask for our needs, they arrest us.”