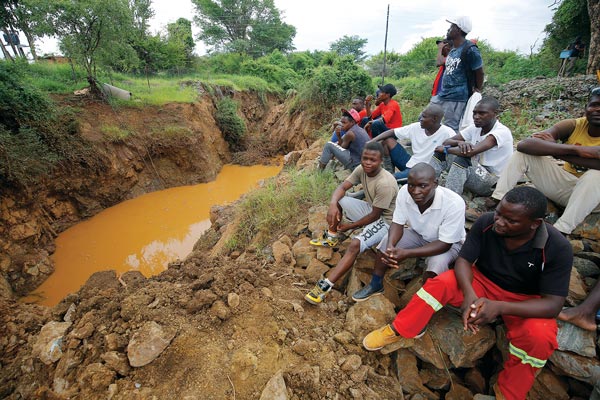 Relatives and friends wait for the retrieval of the bodies of the 23 miners who reportedly drowned at Silver Moon and Cricket mines in Muzvezve, Mashonaland West province when the two mine shafts flooded after a dam wall collapsed upstream following heavy rains this week

Government yesterday said it was mobilising resources to help retrieve the bodies of at least 23 miners who reportedly drowned at Battlefields on Tuesday night when Silver Moon and Cricket mines in Muzvezve were flooded.

Several mining experts visited the scene of the incident as the Civil Protection Unit (CPU) started the process of pumping out water from the two mines with the help of mining companies.

According to reports, the miners died when interlinked shafts and tunnels at Cricket Mine and one owned by a Mr Baxter, were flooded after a dam wall collapsed due to heavy rains received in the area.