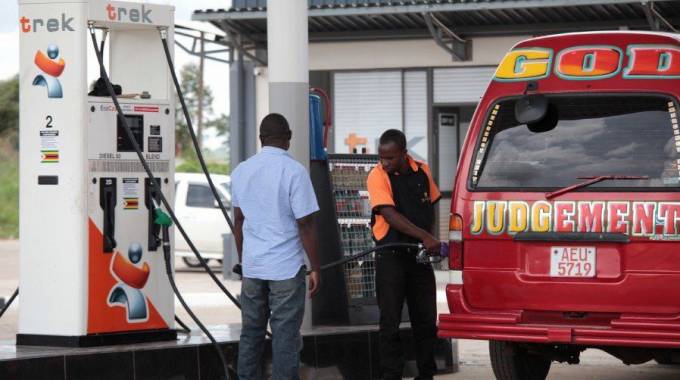 Government is considering shifting from weekly fuel price reviews to monthly adjustments to stem the price volatility that is disrupting planning by businesses and negatively impacting on consumers.

The weekly price reviews were introduced in July as part of measures to liberalise the sector.

The Zimbabwe Energy Regulatory Authority (Zera) has since been tasked with initiating industry-wide consultations to ascertain the feasibility of the proposed change.

Weekly changes in petroleum prices, which normally result in price hikes, are causing significant discomfort to consumers and commuters as they are fuelling inflation and causing persistent fare increases by public transport operators.

Commuters from Chitungwiza are now forking out more than $10 for a trip to the city centre after the adjustment made in the past fortnight.

Other routes closer to the city now cost between $6 and $7.

Although Zupco buses and commuter omnibuses are providing a cheaper alternative, they are being overwhelmed by demand.

Secretary for Energy and Power Development Engineer Gloria Magombo said there are plans to first shift to fortnightly changes before moving to monthly price reviews.

“The fuel pricing model we have in the country at the moment is most responsive to exchange rate fluctuations, compared to other pricing models,” said Eng Magombo.

“So, what has been happening is that since our prices are in local currency while the FOB (freight on board) and the pipeline prices are in US dollars, the prices are multiplied by the prevailing exchange rate.

“The pipeline costs are in US dollars because part of the pipeline is owned by Mozambique from Beira up to the Zimbabwean border.

“As a result of the exchange rate movements, they (Zera) do weekly reviews.

“Why has there been weekly reviews? It is because they are just following the changes in the FOB or the exchange rate.”

The Zimbabwe dollar has lost ground against the US dollar, sliding from 1: 7,2 in July to 1:16,2 last week on the interbank market.

The FOB price is determined by Platts — a global energy, petrochemicals, metals and agriculture information provider.

Since the introduction of the Zimbabwe dollar as the sole unit for domestic transactions, Zera now multiplies the FOB price and freight costs (the foreign currency component) by the exchange rate, before adding around 16 taxes and levies to determine the pump price.

The new method, introduced in August to calculate duty as a percentage of cost, has also contributed to the price movements.

From July 12, when a litre of diesel was selling at $5,84, fuel prices have been increasing almost every week.

Zera, however, did not announce price changes last week.

Weekly adjustments, Eng Magombo said, were preferred as they are easier to absorb.

“South Africa does monthly changes, but their economy is not in transition like ours.

“But as Government, we are very clear that as we go forward and once stabilisation on the macro-economic front is achieved, we want to bring the monthly reviews model.

“We have already written to the regulator to indicate that we are seeing stability going forward. Now we want them to start looking at that option and we need them to engage with the oil companies and the consumers, and be clear on where we want to go.”

Government wants Zera to consider moving to “adjustments after two weeks with a view to moving to a longer period”.

Statutory Instrument (SI) 10 of 2019 provides for the calculation formula for fuel products and lists all the costs included, from the FOB up to the point fuel is released at the pump.

In terms of the SI, the petroleum pricing model includes the FOB price and freight charges (pipeline).

Then, there is the blending cost, which includes the cost of ethanol, while distribution costs include inland bridging costs, storage and handling costs, and secondary transport costs.

In addition, there is the oil company margin and the dealer’s margin.

“This is basically a levy which is paid for by consumers so that when there is a serious movement within the month, the money is used to stabilise and hold the price, and compensate oil companies for any serious change that would have happened. It is a mechanism we are looking at,” said Eng Magombo.

“The fuel price is largely determined by the exchange rate. The focus, therefore, should be to have currency stability.

“The importance of import substitution and exports cannot be overemphasised,” he said.

As long as the Zimbabwe dollar continues to lose ground against the US dollar, the challenges will persist, unless Government reintroduces subsidies, he said.

“Government should consider taking over the burden.

“The challenge is that the FOB price, which is the landing price in Beira, is in US dollars and because our currency continues to lose value against the greenback, the price will continue rising.

“Unless they reintroduce subsidies, we will always have this problem.”

Although fuel prices have been liberalised, foreign currency shortages at times result in supply gaps for the product.

By last week, motorists were experiencing difficulties in getting fuel as supplies at service stations were constrained.

According to Eng Magombo, delays in the roll-over of Letters of Credit, which are used to pay foreign fuel suppliers, caused the current supply gaps.

“The major challenges we have is the roll-over of LCs; at times that roll-over is not synchronised, so it creates artificial shortages,” she said.