Govt must rein in forex dealers 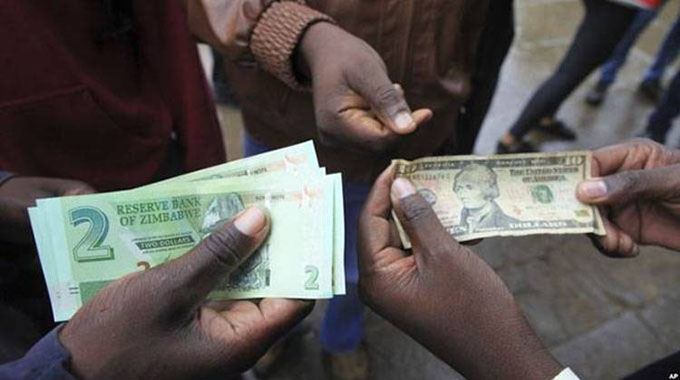 Despite the measures taken, aimed at deterring would-be offenders, it seems the responsible authorities are losing the war on illegal money changers in Harare and elsewhere, as they are openly trading on the streets without fear of being arrested

Beaven Dhliwayo Features Writer
DESPITE introducing heavy penalties aimed at deterring would-be offenders, illegal money changers across the country are back on the streets, well-oiled and operating openly.

In October last year, Government crafted a law prescribing a 10-year custodial sentence for anyone seen trading in foreign currency on the streets.

There were several statutory instruments enacted by the Reserve Bank of Zimbabwe (RBZ), but the police are still finding it difficult to bring cash vendors to book because there is need for an officer of the law to witness an illegal transaction before effecting an arrest.

With law enforcement agencies on their back, the illegal foreign currency traders disappeared from the streets soon after each pronouncement, only to resurface at their usual operating points at Copacabana and Eastgate Mall in Harare, among other areas.

Surprisingly, the forex traders are seen holding crisp $5 and $2 bond notes, yet the banking public is failing to access cash.
Who gives them the cash when ordinary Zimbabweans are buying it on the streets at a premium remains an unanswered question for now.

The illegal money changers are banking on the high demand for foreign currency in the country because many people who buy their commodities outside Zimbabwe require it.

Money changing has also become a form of employment for many, and this will require strong commitment from all players responsible to end illegal foreign currency trading in Zimbabwe.

One worrying case that clearly shows that illegal forex trade has a well-knit syndicate is that of eight currency dealers who allegedly lost US$765 000 to suspected fraudsters in a botched illegal transaction in Harare recently.

The Herald edition of November 5, 2019 reported that the alleged client, Munir Kamruddin Kazi, requested for United States dollars in exchange for over $17 million to be deposited into the dealers’ respective bank accounts. The money, the court heard, was never sent to the dealers’ bank accounts.

This means that foreign currency trade is well-oiled and leaves high suspicion that top executives in banks, companies and State institutions are behind the flourishing of the trade, which is slowly destroying the country’s economy.

The fact is that illegal forex dealers we encounter everyday on the streets are just a drop in the ocean, getting supplies from bigwigs.

In this current environment, businesses with access to foreign currency are selling hard cash on the black market to fund their expenses, including salaries, thereby increasing their profits.

The laws and statutory instruments put in place to fight illegal forex trading are not being fully implemented to bring offenders to book. In 2017, Government, through the promulgation of Statutory Instrument 122A of 2017 — (Exchange Control (Amendment) Regulations 2017 (No 5), criminalised cash vending without permission from the exchange control authority and empowered police to arrest money peddlers and seize whatever currency involved.

The regulation lapsed last year with no major arrests, yet the trade is visibly booming on the streets of Harare and in other towns and cities across the country.

With effect from June 24, 2019, Finance and Economic Development Minister Professor Mthuli Ncube enacted SI 142, which introduced the Zimbabwe dollar as the sole legal tender. The SI does not define the “Zimbabwe currency”, but it makes reference that it is equivalent to the bond notes, coins and the RTGS dollar.

This week, the country expects new currency to begin circulating.
Moreover, SI 142/2019 does not ban the holding of foreign currency, but it only forbids transactional obligations involving forex in Zimbabwe, save for limited circumstances defined in the instrument.

The amendment, which was done through the Presidential Powers (Temporary Measures), empowers the RBZ to arrest and fine people and businesses that continue charging their goods and services in any currency other than the Zimbabwe dollar.
Such commitment by Government means it believes that illegal cash trading is fuelling arbitrary price hikes and rent-seeking behaviour.

Despite the measures taken, aimed at deterring would-be offenders, it seems the responsible authorities are losing the war on illegal money changers in Harare and elsewhere, as they are openly trading on the streets without fear of being arrested.
This raises high suspicion that forex trading is being funded by powerful people in the country who are corrupt to the extent of silencing the ZRP and RBZ’s Financial Intelligent Unit (FIU).

After all, no one is above the law and there is need for seriousness among the authorities so that they don’t give in to corrupt elements, who do not want to see the country back on its feet.

Corrupt bigwigs do not want the country’s economy to stabilise because they are capitalising on the current environment.
Going forward, the FIU must become an autonomous and independent body operating outside the RBZ for it to be more efficient and make weighty impact to combat money laundering, financial terrorism and related crimes.

Considering the situation the country is in, the FIU is one of the vital organs that can put the country back on track, hence it should be well-equipped and highly-computerised.

On its own, FIU must be given powers to block or freeze suspicious transactions and arrest anyone whom it sees or believes are involved in illegal foreign currency trade.

Over and above fighting money laundering, there is need for the FIU to investigate cases of ill-gotten wealth, for instance, people who have acquired several properties, yet there is no disclosure of their source of wealth.

Agents in the Zimbabwe Anti-Corruption Commission and various law enforcement units should unite and form a syndicate that will be watching closely on money movements in the country and arrest those caught out of bounce.

Additionally, forex dealers should take the challenge posed to them by RBZ Governor John Mangudya to vacate street corners where they are playing cat-and-mouse games with the police and at least formalise their trade by applying for licences to operate bureaux de change.