WHEN President Emmerson Mnangagwa took over from his long-time mentor, the late Robert Mugabe in November 2017, one of the noticeable things was his approach to the media, he was more accessible, willing to engage and sought them out at every opportunity to sell his message of hope. And many lapped it up. 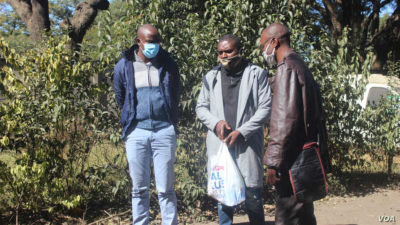 His was going to be a different regime to the dark years of media repression under Mugabe. Many were willing to overlook his track record and obvious traits for the reason that he was now the top man, beholden to no one, and that maybe we had gotten him wrong all those years when he came across as intolerant, irritable and the face of Mugabe’s evil regime.

To criticise him invited immediate backlash from his supporters and those who actually believed his message.

For journalists, however, the situation has remained the same and is in fact, getting darker. The questions then were: how much change or reforms is Mnangagwa willing to allow? How much criticism would he be willing to take? How much media freedom is this government willing to grant?

The answer is not much. The arrest of two journalists on Friday is testament to that. They are accused of failing to comply with police orders will have spent four nights in the cells by the time they are given a bail hearing today.

What is their crime exactly? Samuel Takawira who works for 263Chat and Frank Chikowore, a correspondent for the Voice of America’s Studio 7, were arrested at a private hospital in Harare’s Waterfalls suburb while interviewing MDC Alliance MP Joanah Mamombe and two other party activists who were abducted and tortured by suspected State security agents on May 13.

The police had initially confirmed their arrest for holding an illegal demonstration in contravention of COVID-19 lockdown regulations, but changed tact when they could no longer account for their whereabouts.

The job of journalists is to report relevant news, not what the State parrots, so these two scribes were doing their job and within their rights too. It would have been understandable if the victims and or medical personnel had objected to their presence.

Advocacy group, Misa Zimbabwe notes that between March 31 and April 15, 2020, when Mnangagwa put the country under lockdown to deal with the COVID-19 outbreak, it has recorded 15 cases of journalists either being assaulted, harassed or arrested while performing their constitutionally guaranteed duties.

In many of those cases, Misa Zimbabwe has gone to court to stop the police and State security agents from violating media freedoms.

Zimbabwe continues to fare badly on how it treats its media, ranked at 126 out of a possible 180 in the 2020 World Press Freedom Index, pretty much where it has been during Mugabe’s time. Its 2013 Constitution guarantees rights to freedom of expression, media freedom and access to information. Its media laws, however, continue to be rather oppressive and journalists face punitive measures if authorities deem their coverage of protests, governmental corruption, unemployment or poverty, and the authorities offensive.

At this point, Mnangagwa is looking more like the evil twin of Mugabe than a reformist leader.