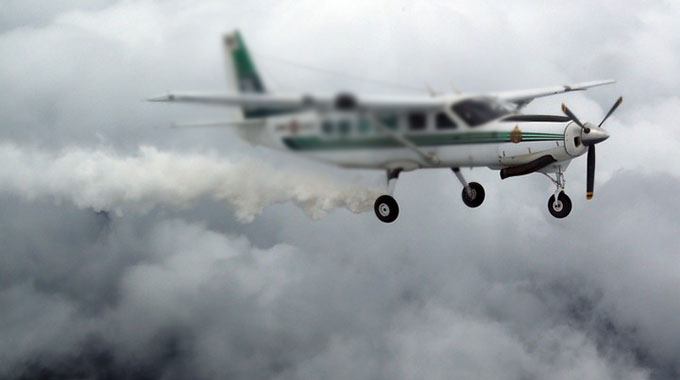 A senior civil servant who recommended that a cloud-seeding tender be awarded to a company with faulty planes unsuitable for the purpose has been arrested and appeared in court yesterday on corruption-related charges.

Blessed Ishmael Murwira Majiga, a deputy director in the Environment, Climate, Tourism and Hospitality Industry Ministry, allegedly oversaw the process to award JR Investment the tender in November last year to supply two aircraft, despite knowing that the planes were grounded, would not be ready in time, did not have the correct equipment, and were not licensed for commercial work.

One of the planes, Baron 58 aircraft registration Z-NXS, was said to be undergoing major maintenance at Taskar Maintenance in Marondera where it was on jacks with its engines opened at the time of inspections.

This aircraft was registered for private use, so legally could not be hired to carry out the cloud-seeding operations.

The firm’s other plane, Baron 58 registration Z-NAB, was not mounted with cloud-seeding doors, had no flare dispenser units, and did not have a two-way communication system.

JR Investments allegedly failed to meet the required standards even after being afforded another chance for inspection at their Harare offices in Avondale, where they only produced two cloud-seeding doors.

Majiga allegedly knew that maintenance of the aircraft would take a long time since it required dismounting large structural sections, so the aircraft could not be ready for the national cloud-seeding operations this season.

Failure to supply the two aircraft in time raised suspicion of others within the ministry leading to investigations into how JR Investments was awarded the tender in the first place, resulting in Majiga’s arrest.

He appeared before Harare regional magistrate Mr Ngoni Nduna who remanded him in custody to today for his bail application.

The State alleges that on September 15 last year, the ministry called for bidders for two aircraft, which were stationed in Harare and Bulawayo, for the national cloud-seeding operations this rainy season.

Bidders had to provide two aircraft with twin engines with full-propeller, air frame de-icing, cloud-seeding, flare dispenser, and two-way communication for the pilot and seeding officer. The aircraft had to be suitable to fly through turbulent clouds and to be available throughout the cloud-seeding operation.

An evaluation team comprising Norman Duri, Linear Gopo, someone called Matenda and Tamuka Zivurawa, was set up to evaluate the aircraft with Majiga as team leader.

The State alleges that JR Investments submitted for the bid the two aircraft despite knowing that their planes were grounded and that one was registered for private use.

On November 4 last year, the evaluation team inspected JR Investments’ Baron 58 registration Z-NAB, where it noted that it did not fit the required tender specifications. The same day the team inspected Nineteen Twenty’s aircraft and noted that it could not be modified for cloud-seeding.

They went to Cypritaf (Pvt) Limited, where two twin-engine aircraft with their documentation, were produced. These had two flare dispenser units mounted and the cloud-seeding equipment was demonstrated in a ground test. The firing mechanisms and the flare dispenser units were also shown during evaluation.

On November 9, 2020, a further evaluation was held at JR Investments offices in Avondale where the firm only produced two cloud-seeding doors.

Then Majiga led his team to Marondera aerodrome to inspect another JR Investment’s plane and discovered that it was grounded and sitting on jacks and it was branded “JR Investments HAC”.

On that day, Majiga, Duri and Zivurawa used their own vehicles to travel to Marondera for evaluations instead of using Government vehicles.

While in Marondera, they also inspected another plane which was undergoing maintenance.

It is after the evaluation that Majiga then recommended JR Investments’ aircraft knowing full that they were grounded and did not qualify to undertake the national cloud-seeding operations.

By awarding the tender to JR Investments, Majiga is said to have shown favour to the firm without following the tender specifications, which was inconsistent with his duties as a public officer.