GOVERNMENT yesterday reintroduced price controls on basic commodities, raising fears of shortages as industry remains under lockdown due to the coronavirus outbreak with supplies running out. 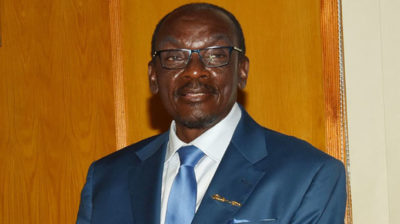 Prices have more than doubled since President Emmerson Mnangagwa put the country under lockdown on March 30, which he extended by a further two weeks to May 3 at the weekend, with long queues now an early morning feature at supermarkets and shops around Harare and major cities as shoppers hunt for basic commodities such as sugar and cooking oil that are already in short supply.

Shops are allowed to operate for four hours daily during the lockdown and the latest move by government could
spark panic buying.

Vice-President Kembo Mohadi yesterday ordered retailers to revert to the prices of basic commodities obtaining on March 25 and accused businesses of profiteering by taking advantage of the lockdown despite inflation rising to a post-dollarisation high of 676,39% in March.

“There is a general agreement among the multi-sectorial partners that the price increase, particularly during the lockdown was speculative and unjustified,” Mohadi told journalists at a Press conference.

“The multi-sectoral stakeholders committed to a price moratorium to operate based on the prices which were applicable on March 25. The moratorium will also apply to all value-chain players. This was supported by a Cabinet decision of April 21 and will take effect immediately.”

Mohadi ordered a freeze on price increases for goods such as sugar, cooking oil, bread, mealie-meal and flour until further notice.

Consumer Council of Zimbabwe chairperson Philip Bvumbe, however, said shops could run dry because of the latest move by government, causing serious shortages of basics in the market and, therefore, called on collective monitoring between government and the private sector to nip the potential of shortages in the bud.

“What needs to be done is close monitoring with government and manufacturers to ensure that there are no shortages of basic commodities. We have to see to it that we have a collective responsibility,” Bvumbe said.

Confederation of Retailers Association president Denford Mutashu said while they were going to be implementation challenges, business was committed to working with government to find lasting solutions on the economy.

“We are prepared to work with government on this and since this was a product of consultation, we will address implementation challenges through consultations. For instance, there are stocks that are being held right now which were purchased using the increased prices by retailers and that is an issue that has to be discussed to see how the price reduction can be implemented,” he said.

Sources close to the deal, told NewsDay that government had promised to ensure that manufacturers and retailers access foreign currency at the bank rate in an effort to keep prices low.

“There will be a meeting between industry and banks tomorrow (toady) at Munhumutapa (Building) where government is set to dangle foreign currency availability as a sweetener to the deal. If that support does not come in a significant way, then the deal won’t work,” said the source.

Grain Millers Association of Zimbabwe chairperson Tafadzwa Musarara defended the price hikes saying they were not effected out of greed but factoring in replacement costs and the movement of the local currency against major currencies.

“Those price increases were not motivated by greed, I would like to believe. But when businesses operate individually, they tend to act individually, but in this instance, government and business have come together and something positive has come out of it, price reductions,” he said.

Previous attempts at enforcing price controls in 2007-8 led to shortages of basic commodities as the country battled hyperinflation which forced it to abandon its currency in February 2009.