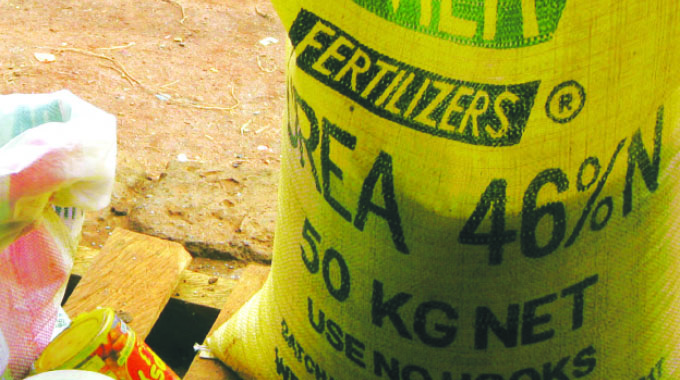 Zimbabwe has spent a whooping U$622 million on fertiliser imports over the past seven years.

The large chunk of the money was forked out by the Government for State-assisted farming programmes such as Command Agriculture and the strategically important Presidential Inputs Scheme for small-scale farmers and vulnerable households.

Had local fertiliser producers been adequately supported, the Government would have spent just US$400 million, not to mention the impact this would have had on industries — both forward and backwards linkages.

The State-assisted farming programmes have largely been hailed for boosting agriculture production and improving food security and the same should be expected through the support of local companies in the value chains.

Zimbabwe’s demand for fertiliser in a normal farming season stands at about 600 000 tonnes, of which 70 percent goes towards Government farming programmes.

To correct the current state of affairs, the Government is coming up with a strategic roadmap to significantly reduce fertiliser imports in the next five years through capacitating local companies.

The Five-Year Fertiliser Import Substitution Roadmap, will be largely focussed on ramping up production at Sable Chemicals, the country’s sole ammonium nitrate producer and Chemplex Phosphates.

An investment of nearly US$40million would see Sable Chemicals increasing output to 240 000 tonnes of AN by 2024 and this would reduce imports from the current 220 000 to 10 000 tonnes, according to the five-year strategic roadmap.

On its part, the Government would support the strategy through provision of stimulus packages, access to supply contracts of Government farming programmes, tax exemptions on raw material imports and Government guarantees to access money for capital expenditure.

Industry and Commerce Minister Dr Sekai Nzenza told The Sunday Mail Business that the strategy would see a massive reduction in fertiliser imports in the medium term.

“Key in this strategy is the development of a robust value chain and beneficiation programme,” said Minister Nzenza.

“Thus applying new technologies to create employment , growth, production, productivity and profitability. Our fertiliser products will target the export market and become competitive when within the region.”

There are 12 fertiliser companies in Zimbabwe with the newer ones being involved in making blended NPK compounds.

Out of these, three companies are involved in the primary production of raw materials. These are Dorowa Minerals which mines phosphate rock in Buhera, which is in turn converted to fertiliser grade Phosphates by ZimPhos in Harare.

Sable Chemicals in Kwekwe produces AN from imported ammonia following decommissioning of its electrolysis plant three years ago.

At the secondary level, three companies have granulation capacity and these are Zimbabwe Fertiliser Company, Windmill and FSG. Windmills operate blending plants.

In a good season, the country requires about 600 000 tonnes of fertiliser. Basal compound fertilisers constitute 350 000 tonnes with the remainder being AN.