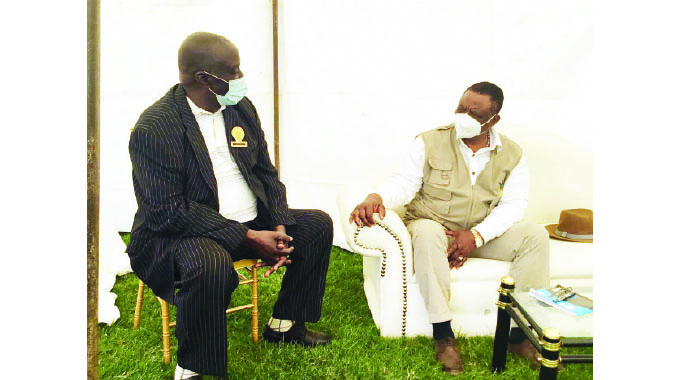 Vice President Constantino Chiwenga (right) in close consultation with Chief Sengwe during his visit to Chilonga in Chiredzi yesterday.

PRESIDENT Mnangagwa yesterday dispatched a team led by Vice President Dr Constantino Chiwenga to Chilonga, Chiredzi, to communicate Government’s vision to hitherto marginalised communities as his administration seeks to transform them into centres of economic growth and transformation.

Recently, President Mnangagwa, in line with his Vision 2030 — to make Zimbabwe an upper middle class economy — directed his deputy and a team of Government ministers to develop a comprehensive development project that will see areas like Chilonga being transformed into development hubs.

Through the expansion of irrigation facilities in the area, that has several water sources, President Mnangagwa’s administration seeks to transform the lowveld into a greenbelt and consequently improve the lives of the people.

As such, Vice President Chiwenga reiterated the President’s assurance that no community will be left behind in terms of development.

In Chilonga Government intends to establish a massive Lucerne project to boost food and nutrition security and ensure self-sufficiency while economically benefiting the locals.

He said the New Dispensation thrives on taking divergent views, encouraging the community to give their contribution on the type of projects they want Government to prioritise for development.

“Let’s work together. We want a shared and common vision as we come up with projects that will benefit the people of this community. No one must be left behind. To achieve this, we all need to participate in these consultations.

“More empowerment projects are coming here, that is Chilonga Two and Chilonga Three. Again the Government is in the process of making sure that each district in the country gets at least 200 hectares under irrigation, and we expect everyone to benefit in the agriculture value chain.”

VP Chiwenga was accompanied by officials from different ministries as Government walks the talk on developing every corner of the country.

Apart from having ideal water harvesting facilities along major rivers, Chilonga also has a potential for tourism as the area has different species of wildlife and also offers mining opportunities.

The VP met legislators, chiefs, headmen, civil servants and members of the ruling Zanu-PF party from Chiredzi district among others to communicate President Mnangagwa’s grand vision for the district which is among some of the most marginalised regions in the country.

The grand vision which Government has for Chiredzi, coupled with  an ever growing population and economic activity, has necessitated a re-look at the local Government structures to ensure the traditional leadership is better placed to carry the administrative demands and burdens.

Government has assured the Chilonga community that no one would be forcibly moved to pave way for the Lucerne project, but a few will be relocated to facilitate developments while Government pays for their resettlement in the same area because the project is for the people.

He said they were working on pastures greenbelts so communities would be able to formulate own feed to enhance livestock nutrition.