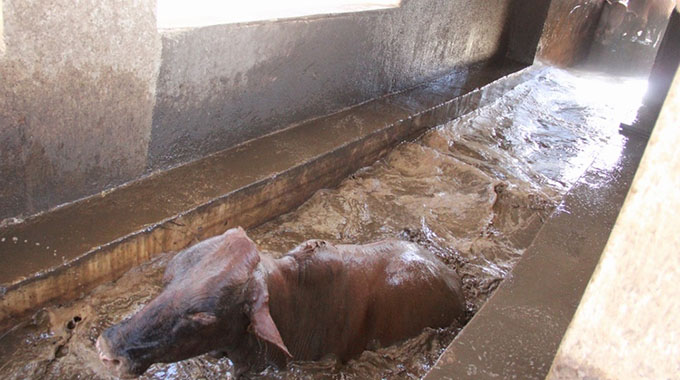 Dipping chemicals for six months have been stocked by the Department of Veterinary Services following adequate financing from Government and its partners.

This will result in a decline in the number of cattle that succumb to tick-borne diseases especially theileriosis also known as January disease.

Theileriosis, is a tick-borne disease that is transmitted by the brown ear tick. The disease occurs from December to March with the peak in January hence the name January disease.

The efficient and cheapest way of dealing with the disease is through the control of ticks by dipping.

January disease is a notifiable disease in Zimbabwe and when suspected farmers are compelled by the law to report to the Department of Veterinary Services.

The department received more than $21 million from Treasury and US$2,3 million from developmental partners: the United Nations Development Programme(UNDP), Food and Agriculture Organisation (FAO) and several chemical manufacturers.

The chemicals have been distributed to 30 districts where the development partners have running pilot projects.

“The dipping chemicals we have mobilised will take us for six months and this is a shot in the arm,” he said.

“There are 3 840 dip tanks under the national dipping programme. The gesture by the development partners leaves the DVS with about 2 000 dip tanks to provide dipping chemicals for the next six months.

“This will go a long way in alleviating the dipping chemical shortages that have caused massive cattle deaths due to tick borne diseases.

“Last year, the country lost more than 50 000 cattle to tick-borne diseases and this year we are more prepared to fight the diseases.

“We hope if we continue getting this level of support we will be able to control January disease.”

Dr Nyika said Veterinary Department staff were on the ground educating farmers on the importance of dipping their cattle.