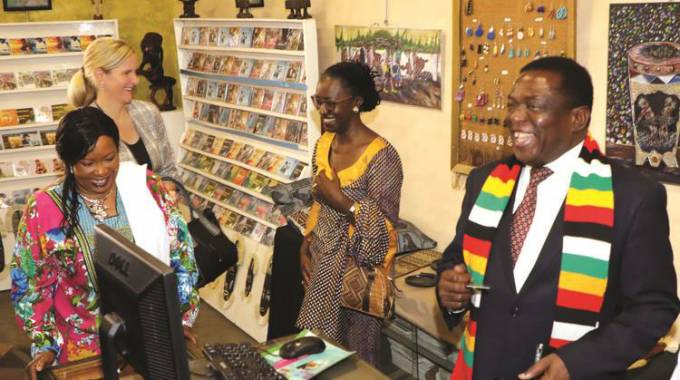 Government will actively support the arts industry and will remove the red tape to create a favourable operating environment that rewards artistes, President Emmerson Mnangagwa has said.

Launching the National Arts, Culture and Heritage Policy in Bulawayo yesterday, President Mnangagwa threw his weight behind the idea of declaring Bulawayo the National Cultural Capital.

He also acceded to requests for the inaugural National Cultural Festival to be held in the city subject to Minister of Youth, Sport, Arts and Recreation Kirsty Coventry making recommendations to Cabinet.

“You have submitted that you want Bulawayo — the City of Kings and Queens — to be the cultural hub of the country, I have no problem with that. It is up to Minister Coventry to make such recommendations to Government,” he said.

The President urged the Ministry of Higher and Tertiary Education, Innovation, Science and Technology Development to include Creative Cultural Industries (CCI) in their innovation hubs.

He said a chamber would be constituted, as requested by the artistes, to be a thinking and lobbying platform for matters related to or affecting CCIs.

President Mnangagwa also attacked piracy, saying it was the greatest threat to the success of the sector and amendments for stiffer penalties exceeding the two years currently in place should be made.

He said a law that requires broadcasters to air 75 percent local content was already in the country’s statutes and must be enforced.

He urged the Ministry of Youth, Sport, Arts and Recreation to set up a one-stop desk responsible for smoothening the passage of foreign artistes who may want to visit and perform in the country.

“You spoke of red tape where foreign artistes are invited and managers from outside Harare are forced to come to Harare for a week to sort out the documentation. A new desk must be set up like a one-stop shop where artistes do everything under one roof while they are drinking tea,” said President Mnangagwa, adding the fees levied on foreign artistes must be lowered.

The arts industry also represents “soft power” that can be used to unite the country, he noted.

“I got interested in this idea of the arts industry uniting the nation through dance. This is soft power for bringing unity, harmony and stability in the country. Restrictive fees, therefore, mean less people and less money. I recommend the lowering of fees for foreign artistes.”

On stolen national artefacts, the President said a list would be compiled so that both the ministries of Justice and Parliamentary Affairs, and Foreign Affairs and International Trade ensure they are returned home.

He left the gathering in stitches when he said he was a bit reluctant to attend the launch as he thought “there would be mbanje and drugs”.

“I did not know they are disciplined and clear on what they want.”

The Head of State and Government invited the three groups that performed at the event, including Jeys Marabini, to State House for more performances and promised to join in the dance.

“I would like to invite Bolamba and Jeys Marabini to State House and I have dinner with them. Vandinakidza. I cannot invite everyone because the State House is small. I would have loved them to all come. When the youngsters are singing and dancing, for a moment you completely forget about the problems in the country,” said the President.

Reacting to requests for diplomatic passports, the President said the sector had to select artistes who should be favoured with the privilege.

The launch was attended by Cabinet ministers, senior Government officials, stakeholders in the arts sector and artistes.