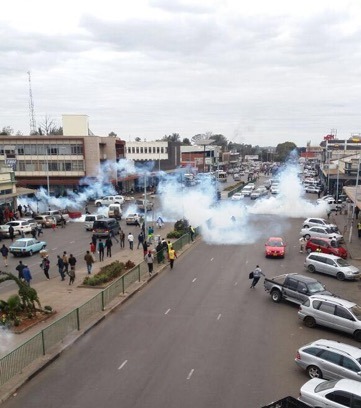 HARARE – Running  battles are expected in Harare’s Central Business District as government seeks to drive away vendors from the city centre, citing health issues following the outbreak of cholera, which has left 25 people dead.

The government is seeking to drive away vendors from the streets today, while the vendors themselves argue that the strategy by government to remove them forcefully will not yield the desired results.

This comes after government invoked the Public Health Act, pushing for all activities that threaten public health to stop forthwith.

Government is said to have mobilised human resources through engaging some members of the security sector and has also put in place other mechanisms and directives to push the vendors out of the city centre.

Following this government directive, the Harare City Council (HCC) posted on its Facebook page, appealing to vendors to move out of the streets as a precautionary measure following the cholera outbreak.

“Harare City Council appeals to members of the informal sector to voluntarily move off the streets of the Harare CBD beginning tomorrow (Saturday) to designated trading sites. This appeal comes in the wake of the cholera outbreak in Harare which is now spreading to other cities and towns and provinces.

“We have taken this action in the interest of public health. We are in constant engagement with the leadership of the informal sector to map sustainable solutions,” the council said.

Informal Sector chairperson Anthony Shingadeya  told the Daily News that he was yet to receive any information from the HCC on the issue.

“I have not seen the directive… I think this is a government programme,” he said.

The vendors themselves have said they need proper planning on government’s side to ensure that they are put in properly-designated places.

Addressing journalists at a press briefing held at Town House, National Vendors Union of Zimbabwe (Navuz) chairperson Sten Zvorwadza, said removing vendors from the streets using force has failed to achieve the desired results in the past, adding that it’s high time authorities pursue other persuasive and participatory strategies.

“We want informal traders to participate in the mainstream economy through participation in business contracts in all sectors. They must be accorded a fraction of all mainstream contracts in order to support their initiatives.

“If we adopt this concept, Harare will be free from vendors in 100 days, without chasing the vendors and taking away their wares,” he said.

Zvorwadza said his organisation has come up with this concept as a smart way of driving vendors out of the city centre, without using force.

“One such important strategy is to ensure that the government of Zimbabwe, local authorities, (and) corporates should conceptualise our concept and decongestion will be a thing of the past,” he said.

Most people are surviving on selling wares, after several companies closed down, owing to viability problems.