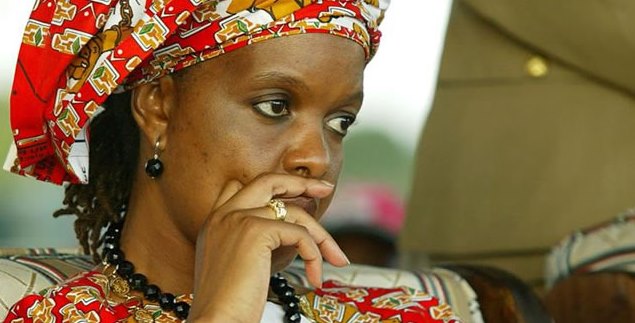 HARARE – Former first lady Grace Mugabe must be on tenterhooks after
lawyers representing South African model Gabriella Engels presented their
arguments in the Pretoria High Court yesterday seeking the lifting of a
diplomatic immunity granted to the wife of ex-president, Robert Mugabe.

The first in a series of steps to have Grace face assault charges, the
court was presented with a legal dilemma yesterday as it considered
arguments presented by the applicants, the Democratic Alliance (DA)’
backed by minority rights organisation, AfriForum.

Yesterday, the court was not sure whether or not the matter was moot
because Grace was no longer the spouse of the fallen despot’ meaning her
immunity no longer existed.

AfriForum has also joined the application to set aside the granting of
diplomatic immunity to Grace by South Africa’s minister of International
Relations and Cooperation, Maite Nkoana-Mashabane, last year.

Grace allegedly assaulted Engels with an electric cord in August last year
because she was unhappy with the escapades of her two sons in a luxury
hotel in Sandton.

Judge Basheer Waglay asked whether the case was not moot as Grace no
longer qualified for diplomatic immunity.

The DA ‘ which launched the application’ disagreed.

It also argued that a decision’ such as that taken by Nkoana-Mashabane’
was binding in law until set aside by a court.

Anton Katz SC’ for the DA’ said granting diplomatic immunity for the
entourage accompanying a head of state remained an uncertain matter.

Engels is alleging that she was struck several times with an extension
cord and was left nursing deep wounds which needed stitching after being
found with grace’s two sons, Robert Junior and Chatunga Bellarmine.

“I hope she does come back to account. I leave everything now in God’s
hands and I know that He will get us through everything,” Engels said to
reporters as she entered the court room yesterday.

He mother Debbie Engels who was also accompanying her said she was happy
the case was now progressing.

“Very optimistic. Very, very optimistic. I’m happy that the ball has
started rolling and we have a good legal team that is backing us, so we
are optimistic that things will go well,” Debbie Engels said.

AfriForum chief executive officer Kallie Kriel said yesterday in the event
that the diplomatic immunity is set aside’ they will ask the authorities
to go ahead with prosecution but if they don’t’ they are ready to do so on
behalf of Engels.

This comes as the Commission for Gender Equality represented by the Legal
Resource Centre and the Woman’s Legal Centre Trust also joined the fight
as “a friend of the court”, arguing that the Special Rapporteur on
Immunities had concluded that spousal immunity was not settled law and is
at best comity.

“Section 7(2) of the Constitution obliges the State to respect’ protect’
promote’ and fulfil the rights in the Bill of Rights and when interpreted
in light of international law’ that obliges the State to take reasonable
steps to protect women from violence. Granting the immunity to Dr Mugabe
violates this obligation,” the LRC and the Commission said in a statement
ahead of the court hearing.

“The Commission agrees with the applicants’ submissions that Dr Mugabe has
no immunity as a spouse of a head of state under international law.
However’ to the extent that the minister granted Dr Mugabe immunity (which
she otherwise would not have had) under s 7(2) of the Act’ the decision
implicates several of Ms Engels’ rights in the Bill of Rights.”

“Women are far too often the victims of domestic assault’ such as the one
allegedly perpetrated by Dr Mugabe. The minister’s decision must be seen
in this context.

“The State should not be reinforcing the patriarchal status quo by
unlawfully protecting someone who has been accused of violating and
abusing a woman.” – Additional reporting by Times Live