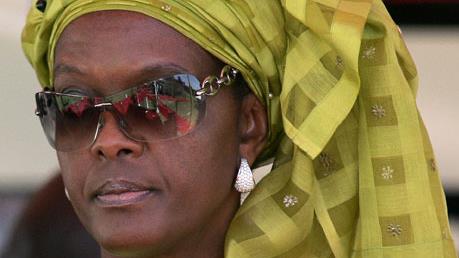 The organisation announced this when it gave updates on matters relating to its private prosecution programme.

“We . . . started with a process to set aside that diplomatic immunity. We are happy to announce that the court case on that issue will be held on the 10th and 11th of May in the North Gauteng High Court. We believe we have a strong case‚” said AfriForum chief executive officer Kallie Kriel.

“After setting aside the diplomatic immunity‚ we can then ask the authorities to go ahead with prosecution but if they don’t‚ we are ready to do so on behalf of Miss Gabriella Engels.”

Grace was granted immunity from prosecution after she was accused of assaulting Engels in a Johannesburg hotel in August last year after she found the 20-year-old model in a hotel with her sons in Sandton, South Africa.

Problems for Grace started when she was accused by Engels of allegedly striking her several times with an extension cord which left her with multiple injures, including gushes in the head and forehead which required sutures.

The former first family’s sons, Robert Junior and Chatunga Bellarmine, were resident in Johannesburg where they were studying following the decision to relocate Junior, who had been based in the United Arab Emirates.

Engels said when she arrived at the hotel visiting Robert Junior and Chatunga Bellarmine, one of Grace’s bodyguards asked her and a friend to wait in a separate room before the former first lady allegedly started beating her.

“When Grace entered, I had no idea who she was. She walked in with an extension cord and just started beating me with it,” Engels said as she filed an assault charge against Grace.

Engels said Grace accused her of living with her sons.

“She flipped and just kept beating me with the plug. Over and over. I had no idea what was going on. I was surprised . . . I needed to crawl out of the room before I could run away.

“Her 10 bodyguards just stood there watching, no one did anything, no one tried to help me.

“I am a model, with this scar over my face, my whole career is ruined.

“I don’t know how to deal with this, but I am trying hard. I am trying so hard to be strong,” said Engels then.

Engels later posted several pictures of her injuries which she said were caused by an extension cable allegedly used by Grace during the assault.

The pictures sent social media into meltdown as the world was abuzz with Grace’s alleged assault of the model.

There was confusion then following conflicting and inaccurate media reports that Grace had escaped from facing justice, when in fact she was still in South Africa as her lawyers and government representatives from the Zimbabwe Embassy in Pretoria, were frantically trying to save her from being arrested and dragged to court.

Former president Robert Mugabe had in August last year arrived ahead of schedule for a Southern African Development Community (Sadc) Heads of State summit in Pretoria, South Africa with suspicion rife that he had gone ahead of schedule to try and resolve Grace’s issue which had threatened to spark a diplomatic row between Zimbabwe and its biggest trading partner, South Africa, after police in that country indicated that they wanted her arrested over the assault of Engels.

South Africa Police Services acting boss Lesetja Mothiba told Parliament’s portfolio committee of police then that Grace’s lawyers had pleaded diplomatic immunity before she was to hand herself over to police.

“The whole thing (assault of Engels) happened, I think it was around Sunday, but the matter was only brought to the attention of the police on Monday in the afternoon and our provincial commissioner put a team together to look for her.

“She (Grace) booked out of the hotel where she was staying together with her sons. Our position was that she must go to court. The whole day yesterday (Tuesday) we were waiting for her . . . we were expecting a statement from her,” Mothiba told the parliamentary committee then.

Mothiba said after consulting the National Prosecuting Authority (NPA) they decided that police were not going to let the first lady off the hook.

Later, The South African police ministry issued a statement in which it said Grace had changed her mind about going to the police as the lawyers together with Zimbabwe Embassy officials had officially invoked diplomatic immunity cover.

“The suspect’s lawyers and her government representatives made verbal representations to SAPS investigators that the suspect wished to invoke diplomatic immunity       cover and thus she elected to change her mind about the warning statement,” the ministry said in a statement then.

“Discussions with the suspect’s lawyers and the Zimbabwean High Commission representatives are taking place to make sure that the suspect is processed through the
legal system,” the ministry said last year.

Although a top official in South Africa’s Department of International Relations and Cooperation (Dirco) earlier said since Grace was not on official business, diplomatic immunity would not apply in her case, she was eventually granted the immunity. — Times Live/Staff Writer