Greed is killing us: Ncube

FINANCE minister Mthuli Ncube yesterday said people could take the bond notes being rejected by the market to the bank in exchange for new notes, accusing economic saboteurs of hindering his economic revival agenda. 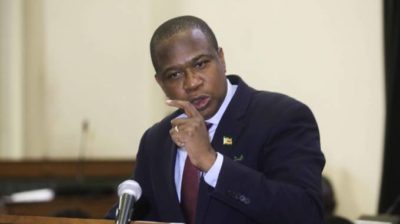 The market has since last week been rejecting bond notes, especially the coins as well as the $2 and $5 notes due to the continued fall in value of the local currency against the US$.

But in an interview yesterday, Ncube said those rejecting the $2 and $5 notes were committing a serious crime, insisting that the government had done everything in the book to try to tame inflation, but their efforts were being frustrated by saboteurs.

“The $2 and $5 bond notes are legal tenders, so they should be accepted, it is illegal to refuse those notes and, therefore, there is need for enforcement,” he told NewsDay.

“Users of the currency also have an option to surrender them to the bank and exchange those notes for new notes, but in the meantime, it is legal tender and it is illegal to refuse that tender.”

Ncube said he remained convinced that the government had tried all it could to stabilise the currency and inflation.

“Price stability is linked to currency stability, so the first order of business becomes to stabilise the currency and the auction system that we have introduced is part of that process,” Ncube said.

“Part of that process includes bringing currency value, stabilising currency and once that is established and then that should engender some sort of stability in prices as well.”

“Last year, we achieved a current account surplus and again, if you look at figures for the first quarter of this year, again the external balance is also the proper fundamentals that drive the value of currencies and so forth, those are in place.

“The issue has been, we have people engaged in speculative behaviour, greed, money laundering and all manner of illicit behaviour, which is driving our currency. This impacts on prices and that is unfair on citizens.”

He said there was hope that the auction system would bring order in the economy and lead to currency stability and that of prices.

The post Greed is killing us: Ncube appeared first on NewsDay Zimbabwe.