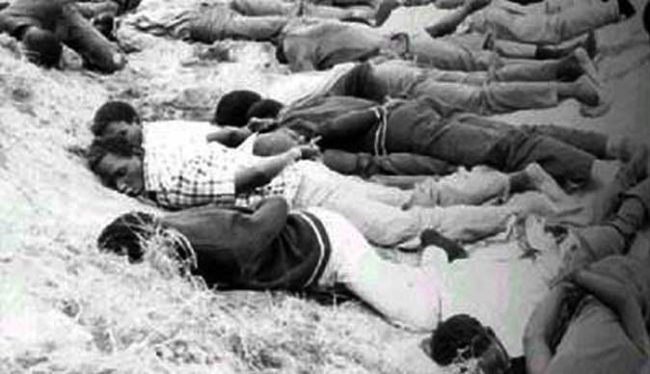 THE recent announcement by President Emmerson Mnangagwa that he would soon convene a “consensus-building meeting” with Matabeleland traditional leaders to co-ordinate and fast-track exhumations and reburials of Gukurahundi victims has sparked outrage from some civic groups and chiefs who argued that rushing the exercise would destroy the
evidence.

According to a Catholic Commission for Justice and Peace in Zimbabwe report, over 20 000 people in the Midlands and Matabeleland provinces who were suspected to be supporters of the late PF Zapu leader and former Vice-President Joshua Nkomo were reportedly butchered by the North Korea-trained Fifth Brigade soldiers between 1982 and 1987.

Justice permanent secretary Virginia Mabiza told the State media over the weekend that Mnangagwa would “soon” preside over a consensus-building meeting with chiefs, civic society and other stakeholders, including the National Peace and Reconciliation Commission to prepare for the commencement of exhumations and reburials. Exhumations and reburials of Gukurahundi victims was one of the key resolutions made by government, Matabeleland civic groups and traditional leaders when they met in March last year and Mnangagwa on February 14 reiterated his earlier promises when he met Matabeleland Collective representatives.

Following Mabiza’s revelation, civic groups and chiefs in the region rapped the government for undermining the importance of victims in making decisions on the emotive
issue.

A Gwanda chief, who preferred not to be named, said Gukurahundi could not be fast-tracked.

“This is death, therefore, it needs special treatment which needs no hurry. Why hurry now since 1983 to date? This is not a joke. We need strategic steps in all this. No hurry, we need serious people and honest engagement with the affected families taking the lead,” the chief said.

Ibhetshu LikaZulu secretary-general Mbuso Fuzwayo said the process “must be done properly with the intention of bringing closure, healing and ultimately nation building. They are talking about exhumations and reburials which is a component of addressing the emotive issue, but it does not bring closure as long as no one is taking responsibility for what happened, why it happened. There are people who were abducted and it is not known where they are, how do you fast-track that?… these unending State House engagements which are elitist, not victim-centred are a clear sign of disrespecting the dead and their families.”

Fuzwayo said Mnangagwa should go to the crime scene and interface with the survivors and not play politics. Habakkuk Trust chief executive officer Dumisani Nkomo said: “The process must have a legal framework, be focused on truth telling, victim-centred, anchored on reparations and memorialisation.”

“Millions of people were and are affected by the atrocities … The resolution of the Gukurahundi issue has to go through its full stages as per international standards and norms. The perpetrators of the atrocities, like President Mnangagwa, must never be allowed to control the process, rather it should be victim and survivor-driven,” Ncube said.

“The victims rather than perpetrators should decide how the genocide is resolved. Any attempts to cut corners should and will be rejected by the people.”

Mnangagwa, who is following through on his promise to ensure that the country confronts its ugly past, has since undertaken to superintend over the implementation process.

On Friday, Home Affairs and Cultural Heritage minister Kazembe Kazembe led a government delegation that included Registrar-General Clemence Masango and Mabiza to lay the ground for the commencement of issuance of civil documents to surviving spouses and the victims’ children.

Mabiza said most of the outstanding issues were to do with the Home Affairs ministry and the Registrar-General — which is the issuance of birth and death certificates.