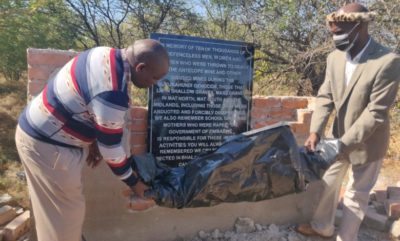 ANOTHER Gukurahundi memorial plaque has reportedly been stolen in Silobela, Midlands, barely a fortnight after unknown people removed a similar structure in Bhalagwe, Matabeleland South.

The plaque was erected by Bulawayo-based pressure group Ibhetshu LikaZulu in memory of 12 villagers that were killed during the Gukurahundi massacres in 1985 in Silobela.

“We hold the State solely responsible for the theft. We condemn in the strongest terms the theft of the memorial plaque,” Fuzwayo said in a telephone interview.

Recently, a Gukurahundi memorial plaque unveiled by Chief Fuyane with the support of Ibhetshu Likazulu in Bhalagwe was stolen barely hours after its erection.

The unveiling of the Bhalagwe memorial plaque was done during a memorial service held in memory of the people who lost their lives during the 1980s Gukurahundi massacres.

In a statement last week, the National Transitional Justice Working Group (NTJWG) condemned the act and urged the National Peace and Reconciliation Commission (NPRC) to investigate the theft of Gukurahundi relics.

“The NTJWG condemns this theft and views it as an attack on the memory of the estimated 20 000 people who lost their lives during Gukurahundi, their families and survivors who continue to grapple with the trauma of this excruciating period. This theft is particularly concerning as it is the second incident of this nature with the first having occurred in 2018 when a similar plaque at Bhalagwe was destroyed.

“Back then, villagers consisting of victims, survivors and families of victims of Gukurahundi atrocities were threatened and warned against participating in erecting similar structures. These incidents are indicative of intolerance and a deliberate effort to rewrite history by erasing the lived experiences of victims and survivors.”

The NTJWG said memorial sites and structures “such as these were a key part of truth recovery and preservation through memorialisation initiatives.

Over 20 000 people were killed by the Fifth Brigade, according to the Catholic Commission for Peace and Justice, which compiled a book on the atrocities titled Breaking the Silence, Building True Peace: A Report on the Disturbances in Matabeleland and the Midlands, 1980 to 1988.