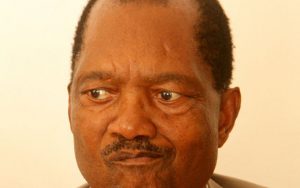 FORMER Cabinet minister and liberation struggle icon, Rugare Gumbo, has flatly refused to accept President Emmerson Mnangagwa’s invitation to re-join Zanu-PF – insisting that it was beneath him to re-apply for party membership of an organisation which he had helped to build.

Gumbo – who was controversially fired from the ruling party in the run-up to Zanu-PF’s sham congress of December 2014, at the height of the party’s factional, succession and tribal wars – added that it was absurd for him to be invited to return to an organisation that he had been part of from his teenage years.

As a result, the respected octogenarian told the Daily News on Sunday yesterday that he was happy to remain “in the terraces” and concentrate on his farming interests in his home province of Midlands – where he hails from together with Mnangagwa.

Speaking in a no-holds-barred interview with the newspaper, Gumbo said categorically that he was not prepared to re-join Zanu-PF as a card-carrying member as he was among the party’s founders.

He argued further that he had only been sacked from the party by former president Robert Mugabe because of Zanu-PF’s then unresolved leadership succession wars.
“I am not concerned at all about re-joining Zanu-PF. Some have gone back but mumwe nemumwe anoita zvaanoda (we all have the right to do as we please).

“I am enjoying myself in the terraces, and I am quite comfortable. I am off politics and I will not apply to re-join a party that I suffered for since I was a kid,” Gumbo told the Daily News on Sunday.

This comes as Mnangagwa has been reaching out to many of his erstwhile Zanu-PF comrades-turned-political rivals – whose relationship with him was destroyed at the height of the ruling party’s deadly factional and succession wars a few years ago.

Among the expelled Zanu-PF members who have since been re-admitted back into the party, as a result of this new initiative to reunite the former liberation movement, are former senior Cabinet minister and party secretary for administration, Didymus Mutasa, and retired securocrat Ambrose Mutinhiri – who briefly led Mugabe’s failed political project, the National Patriotic Front (NPF) last year.

At the same time, the Daily News on Sunday’s sister paper, the Daily News, has also reported that Mugabe himself could make a sensational return to Zanu-PF – one-and-a-half years after the frail nonagenarian was swept from power by a military coup – if he accepts the party’s overtures towards him.

Gumbo added that instead of him returning to active politics, it was time his fellow comrades in Zanu-PF also paved the way for a younger generation to take the country forward.
He said the liberation war generation had played an important role to bring about independence, but now risked sullying its heroic contributions if it did not allow the new generation to bring in fresh ideas.
“Independence is very important for the people of Zimbabwe. It is now a critical moment for reflection of what we achieved and missed.

“We lost a number of people during the liberation struggle. The estimates put the number at 50 000, but it could be higher than that,” Gumbo said.
“There are a number of things that we need to ask ourselves as we celebrate Independence Day. The economy is in a quagmire to begin with.

“This means that we are not enjoying the fruits of independence, maybe because of commissions or omissions on our part as nationalists.
“But there is no doubt that we have to take responsibility for our generational failure. We failed to mentor the young people to take over.

“We must accept that young people should now lead.  We should just let them take over. We need to empower the younger generation,” he added.

Gumbo was sent packing from Zanu-PF in 2014, together with Mutasa and former vice president Joice Mujuru, at the height of the ruling party’s deadly factional, succession and tribal wars – on untested allegations of wanting to topple Mugabe from power.
He is among the small remaining group of decorated liberation war heroes despite having a love-hate relationship with Mugabe during and after the war of independence.

In a previous interview with our sister publication the Daily News, Gumbo claimed that Mugabe wanted to wipe out leading freedom fighters, in particular leaders of the liberation war council that was known as Dare reChimurenga “so as to assume total control of Zanu-PF.”

The former spokesperson of Zanu-PF said he and other members of Dare reChimurenga had clashed with Mugabe over the direction of the liberation struggle, leading to his barbaric detention in Mozambique, where he – together with other comrades – were kept in dungeons.

“We were treated like dogs. We spent at least three months detained in holes dug in an open place which were closed from the top at about 5pm, only to be reopened the following morning.
“The holes were six metres deep and four metres wide. It was hell on earth and we all thought we were going to die.
“At one point the holes were filled with soil and only our heads were left protruding out. But we all survived the ordeal,” said Gumbo then.

He went through that harrowing ordeal together with the likes of the late Henry Hamadziripi, former police commissioner general Augustine Chihuri, former ZBC chief executive Happison Muchechetere and Mukudzei Mudzi.