Harare City could have used lockdown to clean Mbare Market 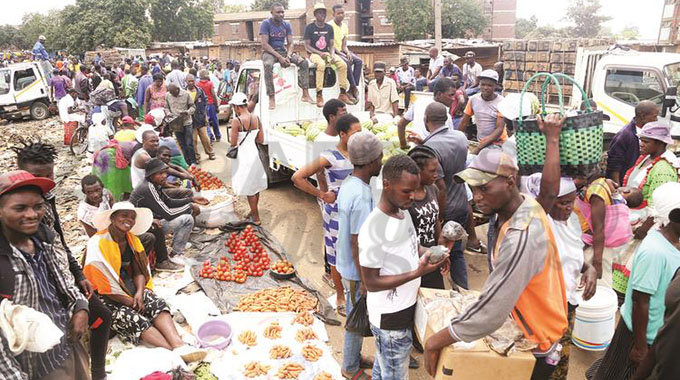 Obert Chifamba Agri-Insight
LAST week local authorities across the country heeded President Mnangagwa’s directive to allow farmers to bring fresh produce for sale after the markets had been shutdown when Zimbabwe started the ongoing lockdown meant to disrupt the Covid-19 cycle.

President Mnangagwa’s act of clemency came against a backdrop of growing calls for Government to allow farmers to sell their perishable produce that was inevitably going to waste if it was not sold in time.

Although the market response was not encouraging on the fist day, with most people complying with Government’s directive to stay at home, the majority of farmers who made it to the market felt it was better to get very little than lose everything, as the produce was eventually going to rot if they had not taken it to the market.

But with the Covid-19 lurking out there, it was also crucial for authorities running the markets to put in place measures that would give the farmers and their other stakeholders that managed to visit the markets some protection against the virus.

At the Lusaka Fresh Produce market in Highfield, health officials from Harare City Council were doing a sterling job allowing moderate numbers of people in and outside the market in tandem with stipulations given under the lockdown.

They made sure all the people entering the market would wash their hands or get sanitised first and would also not congregate inside, but do their business and go home.

This would allow a new set of buyers to get in and make their purchases and leave too.

Social distancing was also religiously observed, with people doing their business in an environment in which all efforts were being made to reduce chances of them contracting the virus in the event that someone among them had it.

The same could not be said of the Mbare Fresh Produce Market, where it was a “no holds barred affair” in which people would mix freely and do business without the slightest indication that there was some deadly virus out there that could harm them.

There was not even the slightest effort to observe the regulations laid out in Government’s Covid-19 eradication programme.

The situation at the country’s biggest fresh produce market exposed the failure by Harare City Council to play its role in the fight to break the Covid-19 cycle through creating the much-needed clean environment that everybody, Government included, would have expected as part of the fight to contain the disease.

Before the outbreak of the disease, Harare City Council would close the market every day at 11am, purportedly to allow their staff to clean it in preparation for the next day.

This time around they had bountiful time to do the cleaning, but did not and the markets were in a sorry state, prompting some farmers and their clients to go and do their business outside.

The place was reeking of rotting vegetable waste from the last days of business in the run-up to the shutdown, which made it difficult for people to move freely, as they would have to contend with navigating through seas of heavy sludge covering the floors.

Of course, Harare City Council may want to argue that its workers too were unable to come to work, thanks to the lockdown, but the Government has made it clear that special service providers could always go to work armed with letters from their employers specifying the nature of their services so that they would not run into problems with law enforcement agents enforcing the lockdown.

It was also necessary for the City Fathers to provide water and soap if they could not afford sanitisers to enable people doing their business to do so in an environment that left them safe.

After all, the farmers bring in money every day and part of that money could have been used to buy soap or sanitisers to protect them.

Huge sums of money exchange hands at the fresh produce market on a normal day, which makes the market an important part of the city’s economy whose smooth operations should be everybody’s business.

It is interesting to note that Harare City Council does not allow any farmer to trade in the market if they do not meet its requirements, so farmers always act in compliance, yet council has never come close to fulfilling its obligations to the farmers on any given day.

Middlemen that have given farmers a torrid time from the distant past were there again last week, yet council did not even seem to notice their presence, which tends to bolster claims by the public that council works in cahoots with the conmen to milk the poor farmers dry.

The order that was maintained at the Lusaka Market made it difficult for middlemen to come and harass farmers, as anybody who had completed their business was told to leave and not loiter.

Those used to hoarding produce and later selling it just outside the market were not able to do so.

If the “strictly business” attitude exhibited at Lusaka Market could be replicated in all markets across the country, then there would not be need to close the markets, but allow farmers to do their business as usual.

Farmers are people whose business thrives on orderliness, hence the need to create such an environment for them to start and complete it in the early hours of the day, as the bulk of the produce has to be sold fresh to fetch viable prices.

This makes it critical for local authorities to create that environment which does not deter individual buyers and retailers from coming freely to do business.

The reopening of the markets last week had ripple effects, as the fresh produce retail section also opened up, which means that it was not the farmers alone that benefited from the opportunity, but a lot of other people along the value chain.