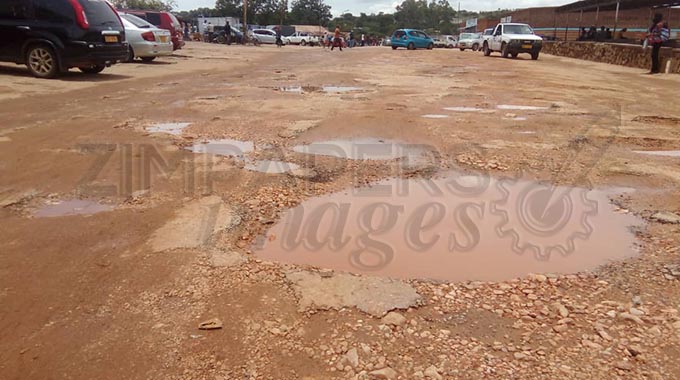 A tarred road that has been left with huge potholes due to rains.

The heavy rains have highlighted the lack of maintenance and lack of required rebuilding on many Harare roads, with the city council getting its fair share of Zinara funds and having access to parking profits, but apparently doing very little with the money before the start of the present season.

Zinara handed over $46 million in October, and even in these post-inflation days that should have filled a lot of potholes before the rains started pouring down.

There are several problems that need to be addressed.

First a road in reasonable condition does need regular maintenance, and this can save a lot of money. Even the best road will develop the odd fault, a crack in the hard surface layer, a ditch dug to get a service to the other side of the road, oil drips from vehicles coming to sudden halts or climbing a hill eating into bitumen, and even damage from road accidents.

If left they develop into potholes as soon as decent rains start falling, especially in a city where maintaining storm water drains seems an optional extra for its council and where many property owners feel comfortable about filling in drains with rubble from building work or even deliberately to get a paved entrance.

Repairing a pothole needs more than just filling it in and shoving some tar on top. Done properly the hole needs to be dug out and the proper layers of stone and clay replaced, with the tarring being the final stage.

So temporary patches are just that, temporary, and it thus makes a lot of sense to fix the fault when it is little and not much work needs to be done.

Then there are a swathe of roads, a large swathe, that were put in by private developers, the council or its predecessor suburban town management boards before the 1969 amalgamation that were fine for light traffic by Model-T Fords or Morris Minors, but are now expected to cope with far heavier traffic loads and carry a fair number of big trucks every day carrying goods to shopping centres or other business needs.

A road is not just a layer of tar on the ground, although that can work for a while on a suburban cul de sac in an area with sandy soils. The main part of the road is the base of layers of stone and clays all packed down hard and carefully calculated to take the loads recorded now and expected for the next half century.

The surface of macadamised stone held in place with bitumen, which also seals the surface, is the simplest and last part.

So there are roads, or at least sections of roads in Harare that need rebuilding, the tar stripped off, the layers repaired in many cases, and built up in others. We saw this in eastern Harare when the old Arcturus Road was, after decades of annual patching, finally properly rebuilt by a competent contractor.

At the same time, the next major road along, Rhodesville Avenue, was redone with basically just a resurface, and now it shows as humps and bumps appear and it is easy to predict that within another season or two there will once again be gaping potholes and basically the bad repair, which must have cost a lot of money, is simply money down the drain, or what would be the drain if the drains had been fixed at the same time.

Even the emergency work done, and done properly, by Government for a basic grid of main roads four years ago, and much of that work was not part of Government’s network of national highways that happen to pass through city limits, will not last forever unless the city council checks for cracks, pays a lot of attention to the verges, which easily erode especially when storm water drains are useless, and generally looks after. The council got a big bonus, and is wasting it.

Many residents would like to know where the council spends that money, what it spends it on, how it spends it, who are the contractors involved and how are suppliers and contractors chosen in the first place.

In fact, residents would like to go further and find out if the money was ever spent on roads in the first place, or if it leaked into other accounts, such as those used to pay the vast number of people sitting in municipal offices.

Zinara reckons that most of the other city councils, municipalities and rural district councils who share the division of Zinara funds use their money properly and well, and manage to keep their road networks in reasonable shape.

Central Government has been using a chunk of its share to go further and rebuild and upgrade the major national highways.

Zinara admittedly had its own problems as the money collection agency. But a proper audit was done, a bunch of officials were arrested or fired, new accounting systems were put in place to make theft and corruption a lot harder, and generally the authority is now fixed.

Eyebrows might be raised over the more than $1 billion it plans on spending this year on upgrading or moving toll gates, money spent on infrastructure to raise money rather than on handing over to roads authorities, but this is part of the clean-up process to fix the mess that its own audit revealed.

Harare City Council probably now needs its own audit. The council is supposed to keep its revenue in separate accounts, with water charges used to maintain and extend water works and buy chemicals, the waste collection fees used to buy and maintain the trucks that collect garbage, and buy the required diesel, and so on.

General administration, and salaries, come out of rates and even that account is supposed to fund a capital budget.

The parking money collected each day is supposed to be in a parking fund, and there must be significant surpluses once the basic maintenance of parking garages and car parks, and the painting of parking bays on the streets, is done.

From what mayors and others have let slip it is likely that this profit goes into general accounts, to pay salaries of high priced officials, many of who are now suspended on full pay while they wait for their corruption trials.

Few would object if the parking profits were used to contribute to the roads fund to maintain the roads that, after all, bring in all those cars that pay the parking charges in the first place.

There is a direct link and people charged $70 an hour to park might still complain, but less vehemently, if they knew that a good chunk of that money was used to fix the roads. And a good audit, to check value for money, is needed at City Parking. Making parking a private company should mean monthly dividends, but can hide waste, bad management, and a whole lot of salaries of people who do little or nothing.

The Zinara funds and the parking profits together should allow the city council to fix and maintain roads at a high level, but we have no idea at the moment of how they are used. Hence the need for an audit, which must go beyond the flows of money but also investigate just who eventually gets the money to fix roads and how they are chosen, and how their work is checked.