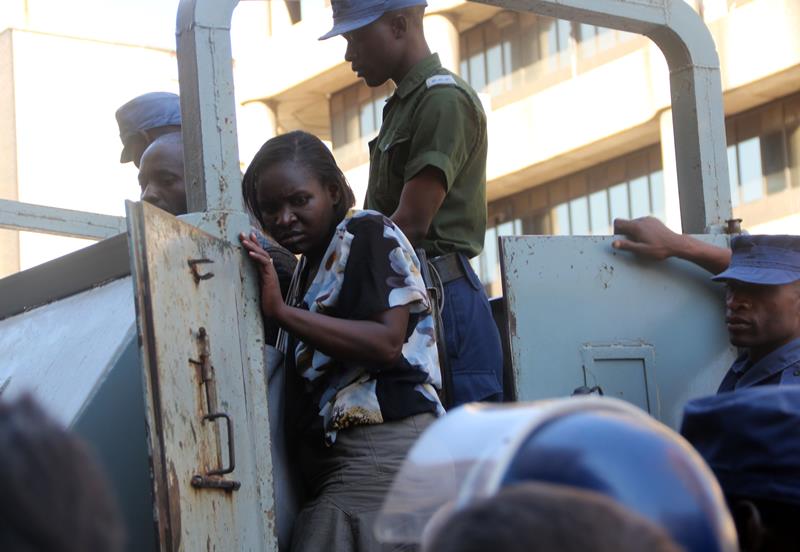 HARARE – At least 24 people have been arraigned before the Harare Magistrates’ Court for public violence, following violent clashes between the army and civilians on Wednesday, which left seven people dead.

The group of people, who include former Zanu PF member Shadreck Mashayamombe, was arrested at MDC headquarters at Harvest House.

Mashayamombe, 35, is jointly charged with Tapiwa Joni, 27, Ngonidzashe Makazhu, 28, Michael Mheta, 31 and Simbarashe Mujeye, 37 and are appearing on a separate record from that of 19 others.

Mashayamombe and his colleagues are accused of acting in concert with 500 others and proceeding to Zanu PF headquarters along Fourth Street, where they reportedly threw missiles, thereby destroying windows and 12 perimeter wall lights. They are further accused of burning six cars and a Yutong bus.

The allegations against the 19 are that on the August 1, 2018 at 12:00hrs, they were part of a group of people that staged an illegal demonstration held by the MDC Alliance against an alleged delay by the Zimbabwe Electoral Commission (Zec) to announce the July 30 presidential results.

“Accused persons acting in common purpose with others who are still at large numbering about 4 000, marched along Rezende Street and Bank Street in Harare Central Business District.

“They were singing revolutionary songs and chanting MDC Alliance slogans. Upon arrival at Market Square police base, the accused persons besieged the police base threatening to assault the police officers,” the State alleged.

The court heard that the police had to call for reinforcements which reacted to the incident and dispersed the accused persons, who ran in different directions.

It is further alleged that the accused persons went to corner Rezende Street and Bank Street and pulled down a billboard with the portrait of president-elect Emmerson Mnangagwa and burnt it.

They then proceeded to KFC food outlet at corner Inez Terez and Speke Avenue, Harare, where they stoned and damaged four large screen windows valued at $700, the court was told. They reportedly went to Pizza Inn in the same area and stoned seven large screens worth $600.

According to court papers, they further went to Baker’s Inn along First Street, where they stoned and damaged 10 large windows valued at $8 000.

They were all remanded to tomorrow for their bail hearing.