MDC-T acting president Thokozani Khupe does not harbour a secret mission sponsored by Zanu PF to weaken the opposition MDC Alliance party and destroy the political career of its leader Nelson Chamisa. Khupe through her spokesperson Khalipani Phugeni (KP) told NewsDay (ND) Midlands reporter Brenna Matendere, that she was not involved in the current woes faced by Chamisa and his MDC Alliance. Below are the excerpts of the interview. 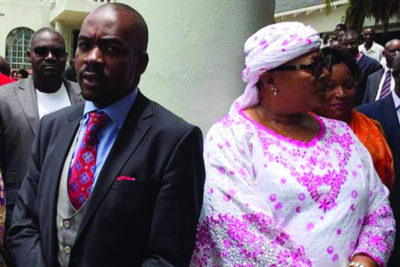 ND: Who is Thokozani Khupe?

KP: Thokozani Khupe is a founding member of the MDC, under the late Morgan Tsvangirai. She became the vice-president of the MDC-T in 2006 and was re-elected in 2011. She started as a trade unionist before she became a politician.

Her passion was always catering for the needs of vulnerable people of Zimbabwe. At the height of political violence, Khupe stood with the brutalised MDC-T victims. During the government of national unity (GNU), she was appointed Deputy Prime Minister.

She is also the former chairperson of the resource mobilisation and employment in Cabinet, goodwill ambassador for Campaign on Accelerated Reduction of Maternal Mortality in Africa. She is the first president of the Global Power Women Network Africa, and an advocate for women’s economic empowerment. She is the founder of the Thokozani Khupe Cancer Foundation.

ND: When did you start working as her spokesperson and how has been the experience?

KP: I started working as her spokesperson exactly 27 months ago and even as I come to the end of my tenure I look back with pride and gratitude to Khupe because the experience has been rewarding in that it’s easy to communicate for a principled person. So when malicious propaganda is trafficked, I would know at times without even talking to her first that this is propaganda and I would be able to push back right away guided by her principles and values.

ND: As a woman, how does Khupe view politics in Zimbabwe?

KP: She is alive to the sad reality that Zimbabwean politics remains the exclusive preserve of a few privileged men, never mind the rhetoric and pseudo progressive chants from the political elite.

ND: What are some of the misconceptions people have about Khupe?

KP: Honestly, I don’t think its “misconceptions” — a large part of it is pure bigotry, tribalism and patriarchy.

I mean just look at the 2018 elections, on paper and on past performance in terms of governance no one comes close to Khupe’s record, yet we all know what the media did to her in terms of malicious articles. The State looked the other way, when an attempt on her life was carried out on several occasions.

ND: After Tsvangirai’s death, some critics say she started to have a soft spot for Zanu PF leadership style and President Emmerson Mnangagwa in particular, what is your take on that?

KP: It is the same malicious campaign I have been speaking to. Khupe did not meet Mnangagwa until after the elections and the Constitutional Court had confirmed his electoral win. At a Press conference, she held immediately after the election, she said “the elections were free of violence, but they were not fair”.

She went on to make the case (as to) why they didn’t pass the standard of fairness, but as a democrat she needed to be magnanimous even in loss and congratulate the winner as she would have expected the same had she prevailed, hence you saw her at that (Mnangagwa) inauguration ceremony.

Now juxtapose her position to that of her detractors; on January 5, 2018 Nelson Chamisa takes Mnangagwa to visit the late Tsvangirai.

The previous year (on) November 24, 2017 Chamisa attended the inauguration of Mnangagwa, but later on dismissed him as a coup President.

April 18, 2018, Chamisa and his friends attended the Independence celebrations presided over by Mnangagwa.

In all these instances, there is a presumption that Chamisa is involved in some noble national engagement with Mnangagwa for the good of the nation and no one must so much impute bad motive by even suggesting that Chamisa was on an individual selfish errand to land a GNU which he will be appointed Prime Minister.

As long as there was hope of (Mnangagwa) appointing Chamisa and his grouping to the national executive of the country there was no coup. (The late former President Robert) Mugabe resigned legally and the promise of the second republic was true. Zanu PF was pristine and association with Mugabe and his G40 was evil and treasonous, hence the spurious attempt to link Khupe and others to Mugabe and his G40.

We know now that actually it’s the G40 and Mugabe who were pristine, according to Chamisa and his group and engaging a duly-elected President of the republic is not only scandalous, but a betrayal of “the struggle”.

ND: How did Khupe fund her 2018 election campaign?

KP: She funded it by liquidating her assets and she was not the only one who did that. I personally sold one of my cars to fund my campaign.

ND: In that case, explain why a former MDC-T official Linda Masarira is on record saying some funds would come from Zanu PF in the build-up to the last elections in a bid to split votes in favour of Mnangagwa?

KP: Let me give you her actual quote so you can appropriately appreciate our response; “We were receiving money from Zanu PF, I don’t know who was the direct contact person who was bringing the money, but we got funding for the party from Zanu PF.” If after reading this statement you do not come to the conclusion that she needs urgent help then you lack compassion. Given the fact that she claims she doesn’t know who was the contact person from MDC-T, one has to conclude that the money would be written Zanu PF, but still she must get it from an actual person or at the very least via an ATM or mobile money platform.

ND: There are reports that Khupe purchased a hotel in Bulawayo soon after 2018 elections and staff at the property said her portraits inside the building confirmed it’s now part of her wealth. Where did she get the money from?

KP: If indeed there are such reports, those reports are devoid of truth and reality and extremely fictional.

ND: Agreement by Khupe to participate in the Political Actors Dialogue (Polad) platform rejected by Chamisa was viewed by critics as confirming her link to Zanu PF leadership. Help us understand her decision to join Polad?

KP: Polad is a dialogue platform for all the contestants of the 2018 presidential elections. In our 2014 congress under the leadership of Tsvangirai, congress resolved that we must do everything possible to bring the government to the negotiating table and it becomes apparent that Polad is a response to that resolution.

ND: How are relations between Khupe and Chamisa now?

ND: Do you think Khupe is bent on destroying Chamisa’s political career and that of his sympathisers in MDC Alliance?

KP: To what end? Khupe is a devout Catholic and she knows the scriptures too well to entertain such self-destructive thoughts.

ND: But the successive court judgments that have come in Khupe’s favour and her recent takeover of Harvest House are interpreted by critics to mean she is working with Zanu PF to destroy MDC Alliance and Chamisa.

KP: I am struggling to understand how the two are related. It is a known fact that Chamisa usurped power, unless he is saying it is Zanu PF which told him to do that. The court outcome was always going to be against him because he broke the party constitution.

Harvest House is the headquarters of the MDC-T, this is common knowledge, therefore, it should come as no surprise to anyone that the party will operate from its citadel.

ND: What were the circumstances leading to Khupe’s visit to Tsvangirai’s rural home last week?

KP: It is common knowledge that Khupe was violently denied the opportunity to bury her president. In consultation with the family and the leadership of the party which by and large was also denied the same, a decision was made that it was the opportune time to go and pay their last respects.

ND: Is it true she and her entourage performed rituals on the grave of Tsvangirai?

KP: No, it is not true. What they did is exactly what Chamisa and friends have done. Basically, go to the grave and supposedly “speak” to the late president.

ND: What is Khupe’s personal view on recall of MPs siding with Chamisa from Parliament?

KP: Her personal views are immaterial when you consider that she took an oath to promote and defend the constitution of the party. However, to answer you directly, she’s heartbroken by the destruction of a project she founded and sacrificed all her life for by “peace-time heroes!”

ND: There is a rift between Khupe and her former ally and secretary-general Nixon Nyikadzino over leadership of the MDC-T. How serious is the fallout?

KP: There is no rift whatsoever between them. The Supreme Court judgment declared the Stanley Square extraordinary congress which gave rise to Nyikadzino’s claim to the SG’s office null and void. That Nyikadzino is struggling to accept that undeniable reality is unfortunate, but in the real world the SG of our party is now) Douglas Mwonzora.

ND: Are you confident Khupe is mounting a strong opposition against Zanu PF with the aim of controlling the levers of power in future?

KP: Of course, I am, but her job is not made easy by a very biased private media which is yet to come to terms with its role in undermining the efforts of the true struggle against Zanu PF.