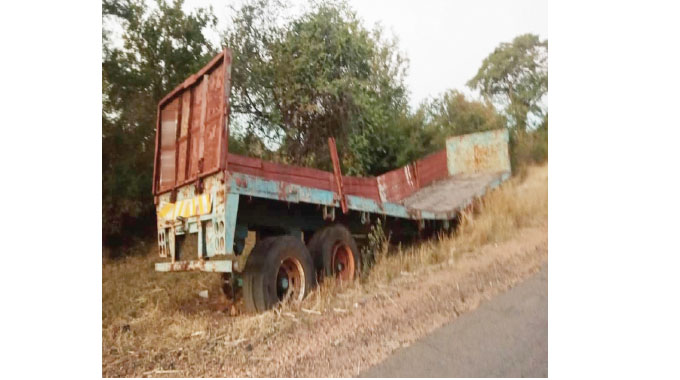 Fairness Moyana in Hwange
ONE of the worst nightmares for any driver is a breakdown in the middle of nowhere. A common feature along the highways has been that any car left unguarded just for a few days, would be stripped by other motorists or those living around the area.

But in a stranger than fiction story a trailer that was abandoned in Dopota, Hwange along the Bulawayo-Victoria Falls highway, 11 years ago has remained intact for all these years. This is not because no attempts have been made to steal parts such as tyres from the trailer, but reports indicate that anyone who has tried to strip the trailer has been met by slaps from invisible hands and people.

Sunday News last week visited the place where villagers and traditional leaders confirmed that the trailer has remained relatively intact because anyone who has attempted to temper with it has been heavily slapped by the invisible “guards”. The villagers said the trailer was left in 2010 after it broke its chassis, by a truck driver who was ferrying coal from Hwange to Harare. Although the trailer load was later offloaded into another truck, the owner had not bothered to tow the trailer.

“At first we didn’t believe the stories but as more and more incidents began to happen that also involved locals who were attempting to strip it, the doubts vanished. There have been several people who have been slapped by the things protecting the trailer. It is now common knowledge that we know this trailer is protected by some supernatural powers,” said a villager called MaNyoni.

Another villager, Mr Samuel Mugande said for some strange reason, the mystical creatures guarding the trailer only attack those who attempt to steal.

“The most interesting part about these incidences is that those that are mostly attacked are those individuals trying to steal from the trailer. People, especially truck drivers, are the culprits that are often attacked by these things when stop and try to steal wheels,” he said.

“The trailer was left in the care of one of the villagers after it broke down many years ago. I hear people say there are things that beat up those who try to strip it. It is now an open secret that the place is haunted by supernatural being.

It appears the issue of the trailer that slaps people is mostly known by truck drivers as many have been victims of the mysterious hands,” said Mrs Ngwenya.

Mrs Lauren Sibanda in whose custody the trailer was left 11 years ago, told Sunday News that although the owner, whom she refused to identify, wanted her to look after it, he later told her to stop guarding it. 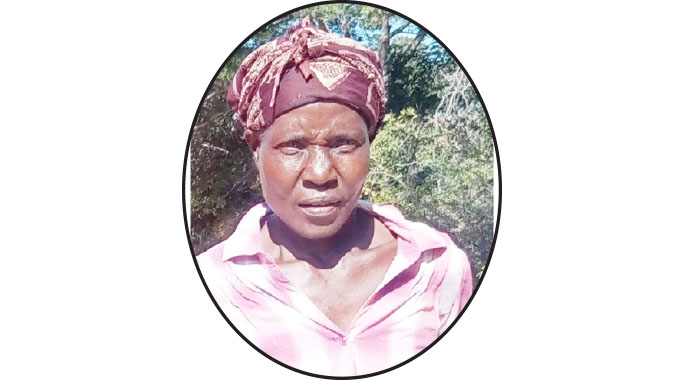 “The trailer has been there for the past 11 years. It was left by the owner in my care after it broke down. Apparently from what I learnt from the owner, a young man whose trucks ply the Harare-Namibia route said the trailer was stolen from him leading to its breakdown in Dopota. Yes, it’s true. We have received reports mostly from motorists who came into contact with the trailer and were slapped by unknown things believed to be supernatural. I have on several occasions heard people I caught red-handed trying to strip the trailer of its wheels crying about being slapped by unknown things with some confessing their misdemeanours fearing the worst,” narrated Mrs Sibanda.

She said the incidents started happening a few months after she had advised the owner of the trailer of people who were trying to steal its tyres and boards.

“About the slappings that take place there, that is better known by the owner. I called him to advise him that they were people tampering with the trailer and he came down here and afterwards told me not to worry anymore. That was the time when the reports of people being assaulted by unknown beings begun to surface.”

Mrs Sibanda, a Seventh Day Adventist, said she was not affected by the mysterious incidents as she sometimes carries parts from the trailer that thieves would have stripped.

“I have personally been in contact with the trailer, including removing some of the stuff for safe keeping following attempts by thieves to steal, but nothing has happened to me. I guess it’s because I’m looking after the trailer. I remember an incident in which a truck driver armed with his toolbox of spanners ran for dear life after being slapped by these mysterious creatures. He is one person who told other drivers of the trailer that assaults people.”

Asked why the owner has not towed the trailer, Mrs Sibanda said the owner had over the years advised her that he was still trying to secure a crane and equipment to ferry the trailer to Harare.

“He told me that he is still looking for a crane to lift the trailer for towing and of late he would just call to say ‘hello’. I later learnt that it’s actually quite expensive to have the trailer towed to Harare or refurbished as it had been idle for a long time.”

When the Sunday News crew visited the site some side boards and wheels were noticeably missing while some graffiti covered some part of the trailer. It was later learnt that all the missing parts were safely in Mrs Sibanda’s care. The trailer is usually deserted, even children avoid playing in it for fear of being “slapped”.

Mrs Sibanda further narrated how some of the trailer’s parts ended up in her care without her even moving a muscle.
“There was a scary incident in which shocked villagers after the car in which three men had loaded the side board of the trailer failed to start. The car only started when they had returned the board and they never returned again. Some people have even lost their way and ended up in my homestead with parts from the trailer only to be surprised, arguing that they thought they were fleeing from the trailer along the highway.”