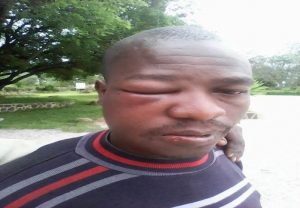 Amos Kumire (MDCT) after the assault.

Heal Zimbabwe expresses grave concern over the increase in cases of politically motivated violence. Cases of violence are being recorded in both urban and rural areas and are both intra and inter party involving mainly MDC T and ZANU PF supporters.

On 10 January 2018, ZANU PF members, in Zaka East ward 31, Obert Sunamisai, Doubt Chitokwani, Forgive Chitokwane and Kumbirai Chitokwane assaulted MDC-T member Amos Kumire accusing him of supporting MDC-T party. The incident took place after Sunamisai had summoned Kumire intending to give him fertilizer at his homestead. Upon arrival, Sunamisai then started accusing Kumire of supporting MDC-T and organizing unsanctioned meetings in the ward. A dispute ensued between the two leading into an altercation. When Kumire tried to walk away, Sunamisai grabbed him and started assaulting him. Within moments, Sunamisai was joined by fellow ZANU PF members (Doubt Chitokwani, Forgive Chitokwane, Kumbirai) who in turn started assaulting Kumire who sustained serious injuries. The matter has been reported at Jerera police station but no arrests made so far.

The incident in Zaka is one among many cases of political violence being recorded countrywide. On 26 December 2017, two ZANU PF youth led by ZANU PF ward chairperson for ward 10, Marondera, Obadiah Chisango heavily assaulted four MDC-T youth at Mahusekwa Business centre in Marondera West ward 10. The ZANU PF youth accused the MDC-T youth of being “sell outs” and organizing unsanctioned meetings in the ward. On 02 January 2018, deadly clashes erupted near the party headquarters in Harare between MDC-T youths and cellphone traders from Ximex complex.

On 02 January 2018 again, intra-party violence broke out in Epworth among ZANU PF supporters. The members accused each other of parceling out land along factional lines. The violence left two minor children severely burnt after the house belonging to Kudakwashe Damson was petrol bombed.

Heal Zimbabwe notes that such demonstration of political intolerance is not only regrettable and unfortunate but have potential of compromising prospects for peace ahead of the 2018 elections if not addressed. Heal Zimbabwe implores political parties to reign in on errant supporters who perpetrate violence. Heal Zimbabwe also calls upon political parties in Zimbabwe to respect and enforce the Electoral Code of Conduct for Political Parties and Candidates, as it paves the way for a smooth electoral process that is devoid of violence. The Code’s purpose is to promote conditions that are conducive to free and fair elections and a climate of tolerance. The police must also be swift in apprehending people implicated in violent activities. In pursuit of his clarion call on the need for peaceful elections, President Emmerson Mnangagwa must do everything possible to ensure that the call on the need for peace and tolerance ahead of the 2018 elections is strictly adhered to and followed religiously.

Added to this, the National Peace and Reconciliation Commission (NPRC), charged with developing mechanisms for early detection of conflicts must without fail initiate robust programmes that seek to prevent conflicts and to promote peace before, during and after the 2018 elections. The NPRC must also set up an early warning system in partnership with other key stakeholders such as civil society organizations and churches for early detection of areas of potential conflicts and disputes, and to take appropriate preventive measures.

Trump Calls Africa and Haiti “Sh**hole” Countries, Says Why Are They Allowed To Enter USA?