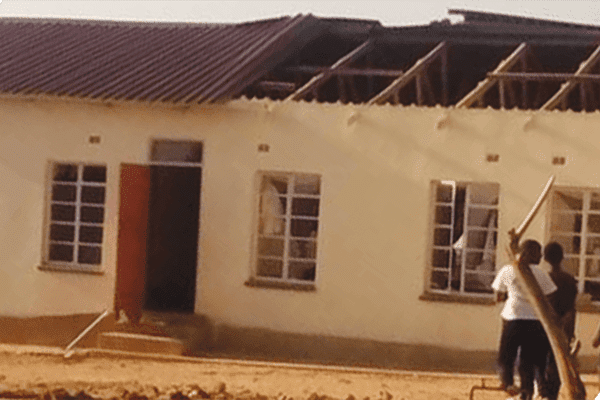 Part of the blown-off hostel roof at Gumbonzvanda High School

The Anglican-run Mt St Mary’s Mission and Gumbonzvanda schools, located about 25km from Wedza Centre, had their dormitories destroyed by the winds, displacing students, while the schools will have to reconstruct the infrastructure, which is set to cost thousands of dollars.

At Mt St Mary’s, the winds blew off the roof of a dormitory on Friday before another destruction at the nearby Gumbonzvanda the following day. There were no reports of casualties and injuries from both schools.

Yesterday, officials from the Primary and Secondary Education ministry visited the affected schools to assess the damage.

Provincial education director Johannes Guri confirmed that some schools’ infrastructure were destroyed by the winds, although he could not give enough detail.

“There are some schools that were destroyed by winds in Wedza and I am currently on my way to Wedza to get first-hand information. I will give an update once I meet the district officials in Wedza,” he said.

Efforts to get more details from Guri by end of day yesterday were fruitless as his mobile number was not reachable.

An education official, who was part of the tour, confirmed that 30 girls at Gumbonzvanda had since been displaced.