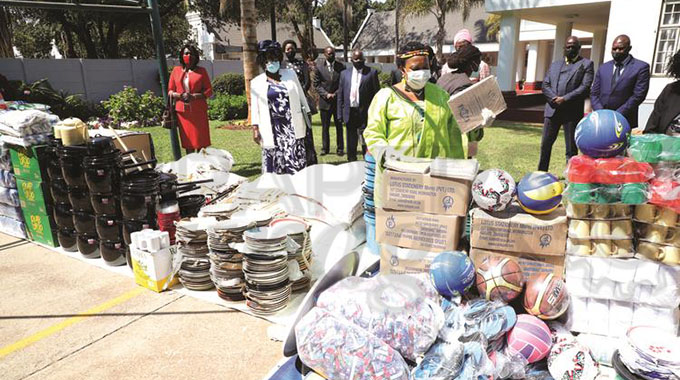 Tendai Rupapa and Joseph Madzimure
Children living and working on the streets possess a lot of potential to succeed in life and everyone must play a role in unlocking that potential, First Lady Auxillia Mnangagwa has said.

She was speaking when churches, businesses and individuals donated an assortment of goods that included food, a satellite television set, toiletries, exercise books, kitchen utensils, curtains, lunch boxes, shoes and balls, among other goods, to Angel of Hope Foundation for onward transmission to Chambuta Children’s Home in Chiredzi where children who were rounded up from the streets are being rehabilitated, thanks to Amai Mnangagwa.

As someone who has a passion for the welfare of children, women and the elderly, the First Lady pledged to assist.

Children living on the streets, Amai Mnangagwa said, were considered a high risk group as they were exposed to several forms of abuse and violations which resulted in negative consequences and undesirable outcomes.

“These children would be deprived of their right to shelter, food, clothing, education, parental care and protection in general. It is from our concern for their well-being that we are engaging in various initiatives to assist children living on the streets.

“As you are aware, in the past two years Angel of Hope Foundation in partnership with the Ministry of Public Service, Labour and Social Welfare, City of Harare and other stakeholders have been working tirelessly together. Several meetings were held at Town House to improve the welfare of all children living and working on the streets,” she said.

The endeavour to assist, the First Lady said, led to the identification of Chambuta Children’s Home as a suitable rehabilitation centre which affords the children an opportunity to pursue both academic and vocational education.

Plans are afoot to make Chambuta a national rehabilitation centre to cater for all children from other provinces.

“Currently efforts are underway to improve facilities at the centre to ensure a holistic package of services for the children. These efforts could be in vain without the concerted support from various partners and stakeholders here present.

“It is my vision and wish to see the lives of these children being completely transformed so that they become responsible citizens for the betterment of our society and the nation at large.

“I have also come to realise that these children possess so much potential to succeed in life and the onus is on all of us duty bearers to unleash that potential. It would be a disservice to the nation if these children’s fate is left to the vagaries of street life when we all can work together to provide them with a safe and protective environment.”

The First Lady said the task cannot be left to the Government alone as everyone had a part to play in the rehabilitation of the children.

“I propose that all hands should be on the deck to assist these vulnerable children. Particularly in light of the current surging Covid-19 cases, hence street life is likely to be a hot spot.

“Of note the engagement we had with the Minister of Energy and Power Development with a proposal to have tower lights and lighting in general installed around the premises to enhance security and to ensure access to e-learning services for our children,” she said.

She had engaged the Ministry of Youth, Sport, Arts and Recreation to have sporting facilities for the children.

The First Lady read out letters written to her by the former street children who are grateful for her move to confine them to an institution where they have shelter, food, clothing and access to education.

“You have love and care for your children. Our old life was not easy to change, but you managed to change us. Now we are living in a mansion.

“We are good children and by God’s grace you will see us rise and you will not be ashamed of us. We would want to look after you when you are old. Thank you Amai.”

The First Lady thanked all those who contributed saying the donations would go a long way in assisting the children.

Director of Sport and Recreation Mrs Eugenia Chidhakwa said her ministry remains alive to the vulnerability to exploitation and lack by children living on the streets and notes that any effort invested in the elevation of these lives was a great step in the building of a great nation.

“The ministry remains mindful and grateful of the initiative by the First Lady, Amai Mnangagwa to uplift the disadvantaged youths who are wasting away in the streets due to an assortment of socio-economic glitches. The ministry also stands in awe at the great work and push the First Lady is investing in Chambuta Children’s Home where she has brought together children from various avenues and corners and provided them with clothing, shelter and education,” said Mrs Chidhakwa.

She paid tribute to Harare City council for stepping in to aid the efforts by the First Lady to liberate youths on the streets through charity.

A representative from the Ministry of Energy and Power Development, Mr Peace Rugube, said the ministry is committed to electrifying Chambuta centre to complement efforts by the First Lady.

“As a ministry we are committed to making sure that Chambuta gets the necessary services and we can confirm that it is already connected with electricity. We are also going to provide further the required energy services so that even the other rooms and outside environment are also connected to the grid.

“We have already been informed that in as much as they are connected they are also challenges in terms of making sure that the whole complex has adequate services in terms of electricity. As a ministry we are then going to make sure that areas that has not been able to enjoy the energy services in the form of electricity are then provided,” he said.

Harare town clerk, Engineer Hosiah Chisango said council was reaching out to the corporate world, religious organisations and willing organisations to come on board for the well-being of these children adding that it should be a collective responsibility.

He said the home is currently housing 65 children who were taken off the streets of Harare.

Businessman Mr Alex Mashamhanda also applauded the philanthropic work being carried by the First Lady in taking care of the underprivileged societies across the country.

“We are all aware of the challenges the world is facing today including our country caused by the Covid-19 pandemic which is posing a lot of financial problems.

“It is against this background that I thank the First Lady Amai Mnangagwa for giving her time and love to the less privileged,” he said

The Department of Social Welfare was represented by Mrs Susan Ngani.