A CHIREDZI woman Morina Musisinyani (30) who, in April this year saved her three-year-old son from the jaws of a crocodile, was honoured on Friday by a feminist organisation.
Whispers, whose leadership includes MDC-T legislator Priscillah Misihairabwi-Mushonga, awarded the woman for her bravery who together her aunt, Beauty Ingwani, fought a crocodile in Runde River. 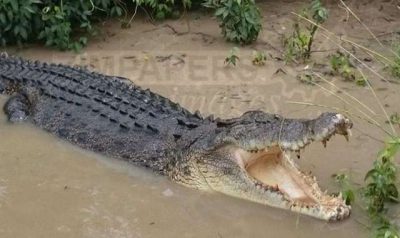 They wrestled the predator until it gave up the child, alive but severely injured.

Narrating her ordeal at an event in Harare where the organisation also launched three feminist publications, Musisinyani said she had gone fishing in Runde River near Gonarezhou National Park with Ingwani, and had taken her son with her.

“I went deeper into the water and then suddenly, I heard my aunt screaming that my son had been dragged by a crocodile,” she said.

“I had to think fast. As it was trying to swallow the child, I went for its (crocodile) head and pressed its nose hard because I had heard that a crocodile can be weakened by pressing its nose.

“It did lose strength and started wriggling in the water. It spat the baby who had by then fainted. The baby fell into the water.”

She added: “I grabbed the baby and the crocodile bit me on the hand while I ran for life. My aunt then assisted me to resuscitate the baby, whom we thought had died due to injuries. We emptied water in his stomach and he came back to life and we rushed him to hospital.”

Whispers honoured Musisinyani with a shield, a cake and cash gifts for her bravery during the event that was attended by several women’s groups and representatives from the Swedish embassy.

Misihairabwi-Mushonga said: “We decided to celebrate Musisinyani in our own African way because if this incident had happened in Europe, this woman (Musisinyani) would be one of the most celebrated women on CNN and other big news channels.

“This is a feminist story and what it teaches us is that if a woman can fight a crocodile, she can run a country.”

Whispers then launched a publication that is titled The Bitch Guide, which come in three series.

The organisation’s board member, Talent Jumo, who is also director of Katswe Sisterhood, said the word “bitch” was an acronym for “babe in total control of herself”, who has courage and can stand up against male chauvinists. The publication teaches women about feminism.

During the launch, other women that were celebrated for promoting gender rights include former Labour minister Lucia Matibenga, Grace Chirenje, Theresa Mugadza, Thoko Matshe, Jenni Williams of Women of Zimbabwe Arise, and Jessie Kabwila-Kapasula, a Malawian politician and feminist.