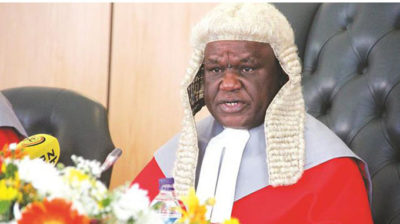 THE High Court has ruled that the extension of the judge’s retirement age beyond 70 years did not apply to Luke Malaba and other sitting judges.

This came after Zimbabwe Human Rights NGO Forum executive director Musa Kika and the Young Lawyers Association approached the court seeking to overturn President Emmerson Mnangagwa’s extension of Justice Malaba’s term by five years on the basis that procedure leading to the enactment of Constitutional Amendment (No 2) Bill into law was flawed.

Kika, through his lawyers Advocate Thabani Mpofu and Tendai Biti, argued that Malaba could not, by virtue of section 328(7) of the Constitution, benefit from the term limit extension as introduced by an amendment of section 186 by the Constitution   Amendment No 2.

High Court judges Happias Zhou, Edith Mushore and Helena Charehwa had already nullified the extension of Malaba’s term, but were still to release the judgment.

According to the judgment released yesterday, the judges ruled:  “Our conclusion is that the extension of the retirement age amounts to extension of tenure.

“The length of extension in the time in the office of their judge beyond the age of 70 years provided in section 186 of Constitution does not apply to the second to fourteenth and the eighteenth respondent,” the judgment added.

On Monday, Malaba reported for work on the basis that government had appealed Justice Zhou’s ruling and on Tuesday Kika filed an urgent chamber application seeking the arrest of the former Chief Justice for contempt of court. Kika pointed out that Justice Elizabeth Gwaunza had been appointed Acting Chief Justice, indicating that Malaba had ceased to hold the post until finalisation of the matter in court.

Malaba and the other respondents had been arguing that no summons or other civil process of the court may be issued against the President or against any other judges of the High Court without the leave of the court granted on court application being made for that purpose.