Hive of activity at vaccination centres 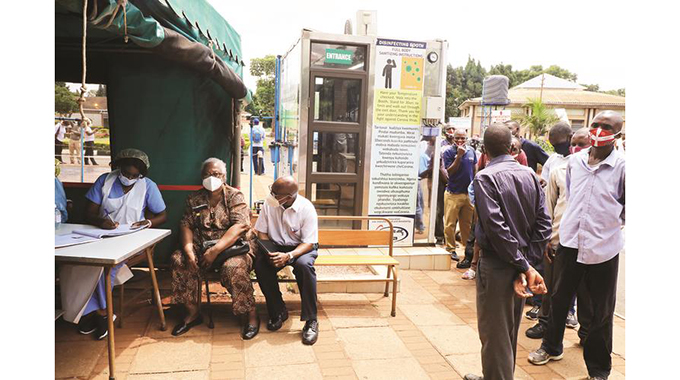 A large number of people turned up to get their Covid-19 jabs across the country.

The national vaccination roll-out is gathering pace as the decentralised centres introduced by Government last week have started registering more activity and Zimbabwe now regularly vaccinating with the first dose over 13 000 people a day.

The increased uptake has been attributed to the availability of more information about the vaccines which has helped convince people in the groups already called in for vaccination to accept their invitation.

At the same time enough people have already been vaccinated to ensure that many now know, or are related to, someone who has already had a jab and so are happy to dismiss social media fake news.

By Wednesday, 153 238 people had received their first shot, around a third of them in the previous five days which included most of the holiday weekend, while 26 179 people have had their second dose reflecting the far slower vaccination programme a month ago.

The two doses for all three vaccines are four weeks apart.

Daily vaccination rates are now in fact running at close to the desired 500 000 first jabs a month, with the vaccine supply chain now expected to see Zimbabwe receiving 1 million doses a month from its commercial orders paid for by Government, enough for two jabs for 500 000 people.

In Harare, the decentralised centres have helped reduce pressure on Wilkins and Parirenyatwa Group of Hospitals which have been receiving the majority of city people who wanted to be vaccinated.

Residents have also embraced the programme which they said would help to prevent the further increase of Covid-19 infections.

Mrs Peggie Simango, said that by taking the vaccine, she had played her part in safeguarding the future of the country.

“I decided to have the vaccine to protect myself and be an example for those who are not willing to come forward. I encourage all women to take the vaccine because we are the backbone of this country and we need to safeguard ourselves for the future of Zimbabwe,” she said.

Amai Doreen Mukwena, a Christian counsellor and life coach, said: “Prevention is better than cure. I urge everyone to come and get vaccinated. Those who are afraid that the vaccine might contain some dangerous chemicals, you should believe in the blood of Jesus. Even if you take poison, it will not harm you because you are covered by the blood of Jesus.”

The response to the vaccination exercise has also been good in all provinces where those in the targeted groups are now getting vaccinated with very few hassles.

In Mashonaland West, there have been long queues at Chinhoyi Provincial Hospital since Wednesday but the municipal council has now helped by stationing vaccination teams at all its clinics.

People who spoke to The Herald said they have now gained confidence in the vaccines despite the previous criticism they had read about.

“I decided to take the jab after realising that all that was said about the vaccines were unfounded. Not even a single person who received the jab has died from it.

“Our President and his Deputy received their shots, which should also encourage us to go for the jabs,” said Lerato Ndlovu a resident.

In Marondera at Dombotombo Clinic, there has been a large turnout of people waiting to be vaccinated since last week.

Mr Solomon Baloyi (45) who lives in Dombotombo said at first he was scared to be vaccinated.

“I have come to receive my jab today because I now know that it is good for me. At first I was afraid because of the news which was circulating on social media,” he said.

In Matabeleland South, vaccination centres in Beitbridge, Bulilima, Mangwe Gwanda, Insiza, Umzingwane and Matobo are now seeing many more people than they were registering at the beginning of the exercise.

Provincial Nursing Officer, Sister Joyce Dube said although statistics were not readily available, the number of those coming up for vaccination was increasing daily as more people started appreciating the importance of vaccination.

“We are getting a good response and our hope is that we get more people getting vaccinated. So far, we haven’t had any major logistical headaches on the ground. We are getting good feedback from all the centres,” she said.

In Kariba district, the vaccination programme continued with over 600 people being inoculated so far.

Those in the tourism sector, one of the Phase Two priority groups, began having their jabs yesterday at a hotel while the rest of the frontline workers and people in other categories will continue getting vaccinated at Kariba District Hospital.

Government has prioritised the tourism sector and those in resort areas for vaccination to protect the local population and also visitors.

“We kick-started the vaccination programme for the categories listed by the Government in the second phase last week,” said Dr Muza.

A special arrangement was being worked out for teachers as there were a large number who needed their own arrangements to avoid standing in the long queues that would result if they all turned up at once.

Midlands Provincial Medical Director Dr Reginald Mhene said vaccination was now being offered at all district hospitals and work was being done to make all clinics vaccination centres to decongest existing sites and ensure every citizen has access to the vaccines.

Most rural people are not that far from clinics, where they expect and get most of their medical needs and attention.

“We also have some outreach teams which are moving from one district to the other administering the vaccines,” he said.

In Bindura, Chiwaridzo and Chipadze clinics have been receiving a sizable number of frontline workers, the elderly and those with chronic ailments coming for the jab.