FORMER Economic Planning and Investment Promotion minister Tapiwa Mashakada (TM) believes Zimbabwe can return to its glory days of the early 1980s when the economy was stable and end poverty. He discussed how that can be done in an interview with NewsDay reporter Brenna Matendere (ND).

ND: Tell us your life story in brief and experience in economics? 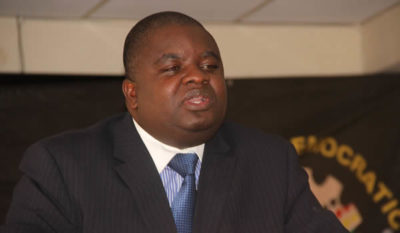 TM: I am a businessman, politician, economist and academic. I am one of the founding members of the MDC, having been the Zimbabwe Congress of Trade Unions economic adviser in the years preceding the formation of the labour backed party. I hold a PhD in Economics from the University of Stellenbosch. I also hold a Diploma in Economic Policy Strategies from Williams College, Massachusetts, a Bachelor of Science Honours degree from the University of Zimbabwe (UZ) and a Masters degree in Economics from the same varsity. I also have a Diploma in Personnel Management from the Institute of Personnel Management (IPMZ).

I have represented Hatfield since 2000 as Member of Parliament.

I was also a Minister of Economic Planning and Investment Promotion during Zimbabwe’s inclusive government.

ND: Your achievements and failures during your tenure in the Government of National Unity (GNU)?

TM: During my tenure as Economic Planning and Investment Promotion minister, I was able to expose Zimbabwe as a global investment destination, but my efforts were blunted by the Indigenisation Act. However, during my tenure foreign direct investment (FDI) flows improved from US$150 million per annum to US$500 million. One of my achievements’ was the establishment of the One-Stop Shop Investment Centre in 2012 and the launch of the Medium Term Plan. I was in charge of developing the country’s macro-economic framework which guided the budget formulation and the growth trajectory of Zimbabwe.

The economy recorded an average growth rate of 7% during this period and hyperinflation was reduced to a single digit. During my tenure I helped reduce the budget deficit to US$150 million by the end of 2013 when I left government after joining it in 2009. But in comparison, from that time of my departure to 2017, the cumulative budget deficit shot up to US$10 billion.

ND: So now in 2020, can you say Zimbabwe is worse off or in an economic mess?

TM: Zimbabwe is facing a huge economic crisis emanating from three burdens. The first burden is a historical one arising from the decimation of agriculture, which was the mainstay of the economy, at the same time destroying the supply value chains leading to job losses, and de-industrialisation. The second burden Zimbabwe carries is the debt burden arising from uncontrolled expenditure, borrowing and lack of fiscal space. The third burden is that of macro-economic fragility as a result of exchange rate misalignment and a debauched currency. And yet the other burden is the burden of sanctions, which does not surpass the burden of corruption and inefficient allocation of resources.

Perhaps in my view, the greatest burden is the reversal of socio-economic transformation as a result of job losses and the ramifications on the taxable revenue base which in turn affects social spending. Today, the economy is dualistic and highly informalised. Poverty levels are rising and social inequalities are widening. The economy does not have reserves of its own. I could go on and on.

So in short, Zimbabwe is going through a rough economic crisis which is very difficult to navigate. But there are also underlying political currents which have had a boomerang effect on confidence and stability. In fact, the economy is captured by partisan toxic politics.

ND: What can the country do to rebuild the economy?

TM: Restoration of economic glory is not a quick fix. The economy has been fractured and dislocated from various fronts over a prolonged period of time. The first order of business is to open the economy to new capital inflows and restoration of international relations and deal with the arrears. Arrears are backstopping new money an official development assistance more than sanctions. Yes sanctions can go, but no new money will come due to arrears. I would recommend the highly indebted poor countries route to lighten the debt burden.

After normalising international relations, I think our domestic politics has to be sanitised so that our efforts are not misdirected and everyone puts hands on the deck. Political convergence brings the requisite stability and confidence. There is merit in the idea of a National Transitional Authority (NTA) to resolve the political impasse. The NTA would kickstart economic, legal, political and institutional reforms and level the electoral playing field in good time for free and fair elections.

Productivity is very important because economies grow on the basis of wealth creation. I am worried that Zimbabwe has become the supermarket of South Africa. We must resuscitate our industries and invest in key infrastructure.

Macro-economic stability can only be realized if there is exchange rate stability. The Zim dollar is not a store of value. Neither is it a convenient medium of exchange. In the circumstances, the economy should be allowed to fully redollarise in order to reset and recalibrate macro-economic stability. Monocurrency only works when it is backed by something. Money is a derivative asset. But most importantly new ways of resource mobilization are urgently required. In this regard, Zimbabwe has to leverage its natural resources even if it means forward sales. There is a long inexhaustive list of things to be done.

ND: Why do you think President Emmerson Mnangagwa’s “Zimbabwe is open for business” mantra failed?

TM: The “Zimbabwe is open for business” mantra has not convinced international capital markets who are concerned by sovereign risk. As an investment destination, Zimbabwe is disadvantaged by high political risk and low returns due to currency and exchange rate instability. In terms of the World Bank rankings, Zimbabwe is yet to address its ease-of-doing business indicators, including high taxation, bureaucratic red tape, erratic utilities (water and electricity), unavailability of forex, macro-economic stability and other inhibitive factors. Negative perceptions have worsened matters and, of course, confidence has hit rock bottom due to political and security developments following the 2018 disputed elections.

In any case, unlike some other African countries with oil and gas, Zimbabwe does not offer any unique opportunities and incentives to investors which are significant enough to set the country apart from the rest. We are living in an era of investment facilitation and I don’t think our institutions really understand global capital markets and the needs of long-term capital.

Look at the capital flight that has been happening at the stock market. Billions of United States dollars have been lost. Investors want certainty and predictability. You don’t change rules on investors mid-stream. In short, the Zim is open for business mantra is more of rhetoric than reality. Government must walk the talk.

ND: How can Zimbabwe rapidly grow its Gross Domestic Product?

TM: Achieving growth is not a problem. However, realising inclusive growth and sustainable development is the real challenge for Zimbabwe. At present all drivers of growth are down. These are agriculture, mining, manufacturing, tourism and services.

COVID-19 has plunged an already weak economy into depression. The economy needs a big economic stimulus package. As regards price stability, it is clear that the weak mono-currency, the parallel exchange rate, supply bottlenecks and the deficit have stoked inflation. These factors remain unresolved.

ND: What is your assessment of Reserve Bank of Zimbabwe (RBZ) governor John Mangudya’s competence compared to his predecessor Gideon Gono?

TM: The governors of the Reserve Bank (Dr Gono and Dr Mangudya) have fallen into the same trap. They have been compromised by the lack of central bank independence. The RBZ governorship is now a strait jacket. Gono faced a collapsed economy and a broke government. He started increasing money supply and we all know what happened. The other hallmark of Gono was the issue of quasi-fiscal operations which compounded the problem.

The two governors have both faced an elephant in the sitting room and that is the budget deficit and its monetisation. Both Dr Gono and Dr Mangudya found themselves performing the involuntary task of sterilising the deficit. As long as central government does not have fiscal discipline, Reserve Bank governors will continue to have a nightmare. In short, both governors failed to deal with the question of currency and exchange rate stability and of course the resultant inflation. Financial supervision has not been easy for the two governors.
ND: Was it economically prudent to bring back the Zimdollar?

TM: The mono-currency was introduced prematurely before the key fundamentals were addressed hence the perennial depreciation against the US dollar. Inflation had rendered the mono-currency worthless. Imagine that the recently imported $20 note cannot buy a loaf of bread. That is the dilemma of the mono-currency, it’s not a store of value. Over the years the mono-currency has lost value against all major currencies and it is not readily available in the banks.

ND: What is your introspection into Zimbabwe’s political economy and calls by civil servants for US$ salaries?

TM: In terms of political economy, government has replaced the private sector as the key player in the economy.

This is wrong. The private sector should be the engine for growth. We are in a situation where the State is both a parasite and predator which is crowding out private investment.

Moreover, toxic politics have put a dent on the economy. The Zimbabwean economy is affected by politics and so is investment. A positive correlation now exists between politics and economics.

Civil servants are demanding to be paid in US$ as a way of hedging their salaries against inflation. It makes economic sense. However, it is not possible unless and until government starts collecting taxes in United States dollars.

ND: What is your projection of Zimbabwe’s economy by December this year?

TM: My projection of the economy is that post-COVID-19, growth will decline by minus 50% and the deficit will rear its ugly head again. Exports will plunge from US$4 billion to US$1,5 billion on the back of company closures, job losses and destruction of global value chains. The economy will witness a Great Depression by year end.

ND: Going forward, some sectors have called for suspension of elections to build the economy, while others feel another GNU could stabilise things. Your thoughts?

TM: Elections are now a permanent feature of our democracy and should be held as and when they are due. But they must be free, fair and credible so as to bring about peace, confidence, stability and legitimacy.

The COVID-19 pandemic came when the economy was already on its knees. Economic recovery post COVID-19 will depend on an externally funded Economic Stimulus Package which Zimbabwe will not get. Using scarce budget resources only will not stimulate economic activities. Most of the budgetary resources are going to food, electricity, drugs and fuel imports leaving nothing for domestic investment and production.

ED [Mnangagwa] will not go anywhere with Mthuli’s neo-liberal policies that have collapsed the economy and brought misery to millions of Zimbabwe. The economy needs a huge shot in the arm of US$100 billion between now and 2023 in order to grow and recover. This kind of money is simply not realisable for Mnangagwa.

The post How Zim can return to economic glory days: Mashakada appeared first on NewsDay Zimbabwe.