I am made of thick skin: Matsunga

Source: I am made of thick skin: Matsunga | Newsday (News) 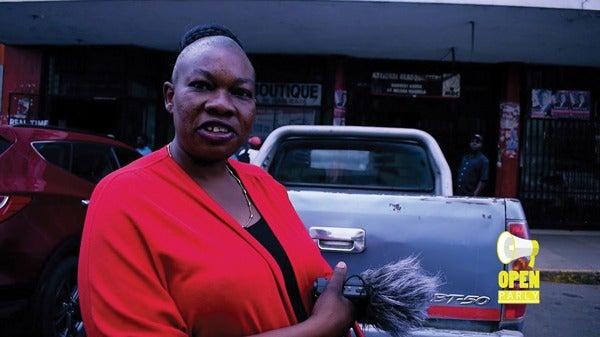 IN the country’s political sphere, it has almost become a trend that the majority of female politicians are now making it to Parliament through the Proportional Representation route, set by government to address gender disparity in the legislative arm of the State.

Female politicians have also, of late, stampeded to get the backing of their political parties so that their names find their way onto the list. Traditionally, women have shunned local politics due to violence, funding burden and smear-campaigns.

But for Mufakose legislator, Susan Matsunga, it’s a different story altogether — a tale of thick skin. The 39-year-old MDC politician chose to fight it out by competing in the 2018 polls. She faced 10 candidates from other political parties including the ruling party Zanu PF, but she trounced them all making it into Parliament following a resounding victory.

The legislator polled 9 987 votes and her closest rival was Duni Derera of Zanu PF who had 2 425.

“We cannot continue to have men dominating the world order. It must be a 50-50 scenario between men and women. Fellow women must develop a thick skin,” the MP said.

Born on August 28, 1979, Matsunga did her primary education at Tendai school and completed her Ordinary Level studies at Mufakose 4 secondary school.

She went to South Africa soon after that and later came back to join the MDC party in 2000 as a youth.

During that year she was voted MDC youth secretary for Mufakose district.

In 2009 she was voted the Harare province youth secretary for gender. At the 2014 MDC congress she was appointed secretary for defence and security at the party’s national women’s assembly by the late MDC leader Morgan Tsvangirai.

This year she was appointed a member of the National Executive Council (NEC) by party leader Nelson Chamisa.

Her first term as legislator started in 2013 after getting into Parliament through the Proportional Representation ticket, but last year she chose to labour it out at the polls.

On October 26, 2016 she hit the headlines and touched the hearts of many when she wept in Parliament after being sexually harassed by a policeman during a scuffle to eject Budiriro MP Costa Machingauta who had entered the august House wearing a jacket with colours of the national flag.

“The policeman fondled my breasts and I cried because I am not a whore. That is one experience that reflects the hardships female MPs face in their political careers. During campaigns, men actually denigrate women saying people must not vote for them because they are weak. There is stigma and marginalisation that affects female politicians because of our patriarchal society background,” she said.

Another painful incident Matsunga experienced in her career was in 2007 during the infamous Machipisa Police Station debacle, when together with other party leaders, she was tortured after attending a prayer meeting in Highfield. Pictures of a badly bruised late founding leader Morgan Tsvangirai nursing a swollen face and black eye were captured by the media.

“That was one of the worst chapters in my political career. Images of the late Tsvangirai just tell the story, but we were subjected to serious torture just that we were youths and focus did not come on us. That made me strong and strengthened my resolve to fight Zanu PF,” she said.

Her message to female aspiring politicians says it all:

“I encourage my fellows not to shun politics. These are the platforms of impact and influence to shape destinies of people and the nation. Women should not relegate themselves to housewife economics, but seek to express their goals and dreams in politics unrestrained. I urge women to be brave and join politics.”

In Mufakose, Matsunga is trying to improve lives of people and she has a big vision.

“I have started to fix and repair 21 boreholes and so far work on six of them is in progress. I’m also, in a broader sense, consulting several institutions like churches on what more we can do. I have been to two anniversaries of Zaoga in my consultation drive. Also I am the current patron of the Mufakose pensioners association where I am helping them to deal with payment of council rates and their welfare. We are undertaking a refurbishment exercise of Mufakose community gym as another project that will benefit our constituency in different ways,” she said.

“The vision I have for the constituency during my tenure is to install two community WiFi internet centres in Mufakose and to ease transport woes for people by providing local community busses that I am sourcing in conjunction with well-wishers in the diaspora. I also want to see to it that the local home industry sector is established with self-help projects rolled out for the under-priviledged and unemployed,” she said.

Child marriages and domestic violence are some of the critical issues that the MP will be lobbying to end through legislative frameworks.

Lynett Karenyi-Kore, the MDC deputy president, who is herself a resilient female politician, has pledged to act as a pillar of support for all women politicians like Matsunga.

“In the fight against child marriages and domestic violence, I share the vision of Matsunga. We are in that together and we want to end the scourge,” she said.

“She is a woman who is fighting for justice and emancipation of women from societal challenges. She is fighting hard to end poverty and empower women. Her political career is inspiring to other women,” he said.

MDC organising secretary Amos Chibaya said: “The MP’s efforts in heightening democracy and good governance are plausible. Her campaigns ahead of the 2018 elections were peaceful and she avoided hate speech against her opponents.”

Mbizo MP Settlement Chikwinya, who has worked closely with the MP in Parliament, described her as fearless and hardworking.

“She is a woman who is very hardworking. In parliamentary committee work, she is a workaholic. She gives inspiration to many, even from other committees. She is fearless in tackling wrong doing. At the same time she is courageous, that is why she opted for direct election and moved from the Proportional Representation race. There are very few people like her,” said Chikwinya.

The post I am made of thick skin: Matsunga appeared first on NewsDay Zimbabwe.