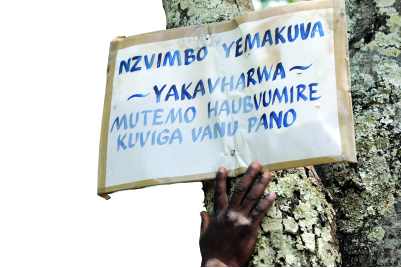 A secret cemetery is mushrooming in the outskirts of Harare, The Sunday Mail Society can reveal.

Our investigations reveal that Harare residents, the majority of whom are from the poverty-stricken suburb of Hatcliffe Extension, which was at one time a squatter camp, have created for themselves an illegal graveyard at Plot 11: Sun Valley.

The “idle” farm is located on the boundary of Mazowe and Goromonzi districts.

It is owned by the Williamson family.

Here, the bodies, some of which are buried in the dead of the night, are interred without the required documentation such as burial orders.

Joining the residents in secretly burying their dear departed are artisanal miners, some coming from as far afield as Shurugwi and Hwange.

A burial order is issued in terms of the Births and Deaths Registration Act, whereby the state authorises the burial or cremation of a corpse.

Residents have resorted to the secret graveyard as they cannot afford to bury their relatives in bonafide cemeteries.

An ordinary grave space at some of the local cemeteries cost anything above US$100 while a similar space at the farm is pegged as low as US$5.

“The majority of the people that live in surrounding areas are poor and cannot afford to pay for burial space at the two cemeteries that are within the vicinity. As a result, the residents are resorting to bribing the farm’s caretaker so that they secretly bury their relatives at the farm,” a source who requested anonymity said.

The source, who is not part of the farm workers, confessed to burying two of his relatives at the “illegal cemetery”’.

“After working in Zambia for a long time, my brother-in-law returned with nothing. He became ill and subsequently died. Since we did not have the money to buy burial space at the nearby Glen Forest Cemetery, we then approached the farm caretaker who facilitated the burial,” he revealed.

His family paid the farm caretaker, whom he identified as “Mujubheki”, US$4 as a “token of appreciation”.

“After giving Mujubheki the money, we were taken to the graveyard, which is down in the wooded valley and we were told to bury our relative as quickly as possible ‘since the owner of the farm might come back anytime’,” he added

“As far as I know, council did not receive and process any application for a cemetery in the area that you are referring to. We will dispatch our officers to investigate,” he said.

But Ms Julie Glen Williamson who is part of the farm owners was quick to rubbish the claims.

“There are no burials taking place on our plot. What you refer to are burials which have taken place in the past where people were referred to us and could not get burial elsewhere,” said Ms Williamson.

However, she said they were turning away several people intending to bury their departed loved ones at the farm.

“We are not a cemetery and do not purport to be. To the best of my knowledge, everyone had a burial order. It is not a public cemetery. My father-in-law died in 1991 and we obtained permission to bury him here and thereafter the same for workers’ families.

“Subsequently, some who had nowhere else to bury were referred to us and we allowed them to apply for permission. It is not public and never has been . . . I can’t imagine why this is of interest to anyone.”

When this crew visited the farm last week, a notice, which was nailed on a tree at the farm entrance read: “Hapasisina nzvimbo dzekuviga vanhu. Hazvibvumidzwe nemutemo kuviga vanhu pano.” (We no-longer have burial space. It is illegal to bury people here.”

Sizani Ndavava, whose house is less than 10 metres from the tree where the notice was placed, confirmed that illegal burials were taking place at the farm.

“From my understanding, some people from Hatcliffe Extension approached the caretaker and begged him to approach the farm owner to allow them to bury their relative at the local graveyard and were given permission to do so.

“Ever since, some people are coming here and secretly burying their relatives without the farm owner’s knowledge,” Ndavava said.

“When we came, we were told that it was not allowed to bury our relative at the cemetery and doing so would be at our own risk. However, we were then discreetly given an option to covertly do so. Since we were in a hurry, we did not dig a standard grave as we feared the farm owner would catch us in the act. It was extremely shallow,” he said.

We tracked down Mujubheki who we later learnt is officially named Mr Tiano Jubheki.

The panicky farm caretaker distanced himself from any wrong doing.

“I only helped a few people who had approached me and begged that I negotiate for burial space with the farm owner on their behalf. The farm owner granted them permission but I did not get a single cent in the arrangement and that was a very long time ago,” Mr Jubheki said.

Could Mr Jubheki be conducting underhand dealings without the farm owner’s knowledge?

Evidence on the ground seem to suggest so. In fact, locals refer to him as the “grave baron”.

When this publication visited the cemetery, fresh mounds of soil indicating recent burials could be seen.

Also, there were several fresh footprints.

The majority of the graves are unmarked, were dug haphazardly and are covered by tall grass and bushes.

Quizzed about the fresh mounts of soil, Mr Jubheki struggled with his response.

“ . . . there are people who approached us seeking burial space, but were denied. These are the people that are saying all sorts of things. As for this freshly dug soil, I don’t know what is happening. I hardly pass through this place,” he stammered.