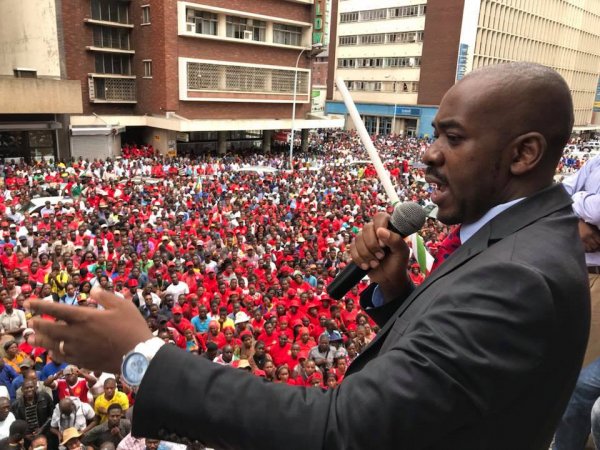 MDC leader Nelson Chamisa has said he will lead from the front in the party’s planned demonstrations against the “stolen vote” and the state of the economy.

Speaking at a “thank you” rally in Chinhoyi yesterday, Chamisa said his supporters countrywide were impatiently waiting for the signal to demonstrate in Harare.

“I’ve been moving around the country getting views from the people who voted for us on the way forward and it is very clear that they are eager to demonstrate … if I see that there are people backing me, I will lead from the front,” he said.

This comes after the MDC leader told a Press conference last week that the decision to participate in the August 1 deadly protests was “stupid”.

“It was very stupid even for people who demonstrated, to demonstrate for the results to be released. It was stupid because they then opened themselves for attacks and for manipulation,” he said in Harare last Thursday before he later apologised for the gaffe.

Yesterday, Chamisa said demonstrations were rights enshrined in the Constitution and no one could stop the will of the people.

The youthful MDC leader, who was in a combative mood, took a swipe at the army for taking sides with Zanu PF, saying the army and police were for the people and should help the voters to protect their votes.

“I’m concerned with the behaviour of the army at the commission of inquiry of the August 1 shootings,”he said.

“It shows that they are far from being neutral … they should desist from supporting Zanu PF because the problems that we have in the country were caused by Zanu PF.”

Chamisa seemed to make a U-turn on the issue of appearing before the former South African President Kgalema Motlanthe-led commission of inquiry, saying he would first make consultations before deciding whether or not to attend.