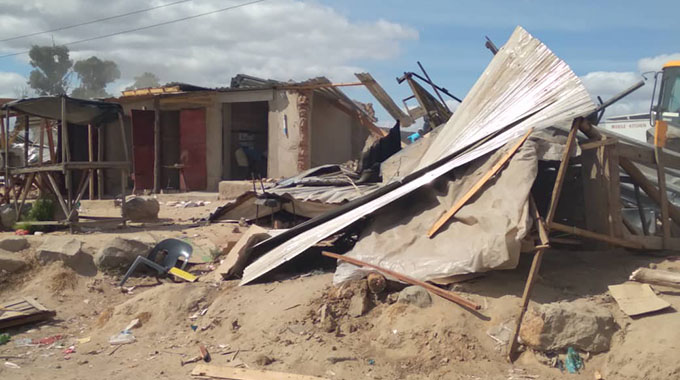 Daniel Chingoma’s shacks, which he was renting out have also been destroyed. Pics by Blessings Chidakwa

The demolition of illegal structures built along Harare Metropolitan road servitudes is continuing today with hundreds of shacks having been demolished across the province by midday.

Local authorities, which embarked on the exercise yesterday, are today in full force, with Harare Municipal police having destroyed shacks at the Mbudzi round-about which were making it hard for road expansion and also causing congestion as they were encroaching the road servitude.

When the demolition exercise started, the majority of the informal sector had removed their wares with only a handful doing so at the last moment.

Sanity is likely to prevail at the busy intersection which is headed for a major road expansion as it has battled traffic congestion over the years.

Police is also present, closely monitoring the situation as hordes of people are witnessing the exercise.

In Chitungwiza the municipal police have also reportedly embarked on a similar exercise.