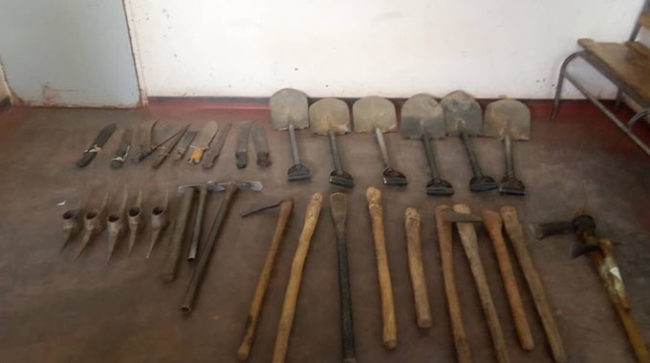 MINERS have called on the government to impose a shoot-to-kill policy when dealing with machete gangs, popularly known as MaShurugwi, who have unleashed a terror campaign in the mining sector.

“This is the right time for government to put such policy on the machete gangs. They have caused enough problems for miners and government should put a stop to it right now. A shoot-to-kill policy will work to put deterrent measures to their activities,” he said.

Also calling on retailers who sell machetes and pangas to be regulated, he added: “They should not sell these weapons over the counter to anyone who just walks in to buy. I think there should be a good reason given by someone buying these weapons. It should not be that everyone who thinks of buying a machete will have it readily available,” he said.

The call comes a few days after the Parliamentary Portfolio Committee on Mines and Mining Development asked the government to impose stiffer sentences against the machete gangs, who they said were now a danger to society.

The call was made as part of its resolutions following an urgent meeting on the activities of the terror gangs at Parliament last week.

The committee also resolved that government should kick-start legislative procedures to allow for stiffer penalties with regard to such perpetrators as was done in the Criminal Procedure and Evidence Act regarding the vandalism of railway and electrical material, among others.

The machete gangs have unleashed a reign of terror in the mining areas where they have killed dozens of people, robbing them of their gold and other valuables.

According to statistics, machete gangs have killed over 100 people in gold wars.

Last week, 47 machete gang members were arrested after two of them were shot by the police when they hired commuter omnibuses from Kwekwe to attack a police station in Gokwe North.

The gang intended to force the release their colleagues who were in police custody.