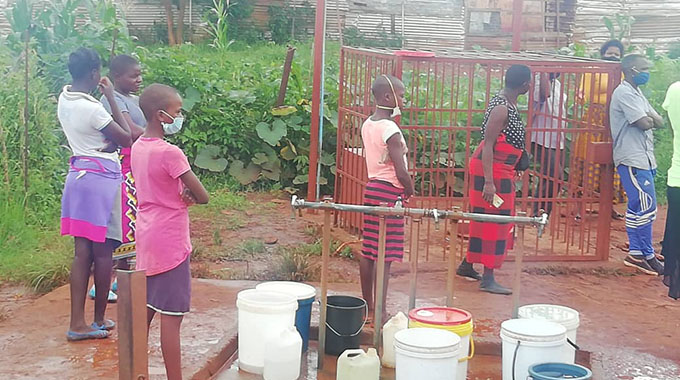 Water is such a precious commodity in life and addressing the constraints women and young girls face in accessing and managing it, is important in the fight against gender based violence (GBV).

And recent media tour organised by UN Women to Hopley and Epworth, major sprawling settlements to the south and east of Harare showed the connection between lack of access to water, sanitation and hygiene to GBV.

In the 2019-2020 rainy season when Zimbabwe experienced the worst drought in nearly four decades, water scarcity in Hopley and Epworth which have no clean piped water, electricity and regular settlement plans, was dire.

So many reports on harassment and violence, including sexual violence on women and young girls were reported in the media, piling pressure on policy makers to find strategies to address the problems.

A lot of the challenges related to access to water, sanitation and hygiene still remain unresolved.

The coming of the dry season in the next few months will these problems related to GBV cropping up again much to the detriment of vulnerable women and young girls.

To address problems related to safe access to water, sanitation and hygiene for women and young girls in Hopley and Epworth, a consortia comprising the Zimbabwe Women’s Bureau (ZWB) and other community based organisations (CBOs) are spearheading programmes to raise awareness on the impact of GBV on women and girls.

The programmes running under the Spotlight Initiative supported through a partnership between the European Union and the United Nations are aimed at ending violence against women and girls and harmful practices.

Zimbabwe is among the 20 countries in Africa, Latin America, Asia-Pacific and the Caribbean which are participating in the four – year programme which started in 2019 and ends in June 2021 for the first phase.

The country was supported by the EU to the tune US$30 million for the first phase to help Zimbabwe meet some of its Sustainable Development Goals (SDG 3 and 5) on empowering women and girls to realise their full potential in a violent free, gender-responsive and inclusive environment.

Tuition Masvusvu, a young volunteer and researcher of Hopley Can Change Initiative (HCCI), a CBO, says lack of easy access to water can lead to violence against women and young girls, tensions within households or fights between neighbours or other users particularly when water is scarce.

“Water touts can demand a kiss and a hug from young girls for instance, to enable them to access water, “ she says. “In other cases, if it involves more buckets or drums that need filling, they coerce young girls and women into sex. If you don’t offer them sex, you don’t get the water.”

A research she other 20 other researchers did in Hopley showed that the root cause of violence is the difference in power between people and women or between people of different social groupings.

In Hopley, she says, poor access to water increased vulnerability of women and young girls to violence.

“Lack of access to water, a toilet in or near the home forces many women and young girls in this settlement to defecate in the open after dark or having to walk long distances to collect water,” Masvusvu says.

“All this in turn increases their vulnerability to harassment and violence, including sexual violence. So we are urging the government and legislators to push for the implementation of strategies to improve access to water, sanitation and hygiene to help reduce gender-based violence.”

Their study showed that only 5 percent of people in Hopley have access to running water. At present, Hopley has one functional borehole out of the 25 installed in this sprawling settlement south of the capital.

It is estimated that the area has more than 60 000 people clustered in six zones without a regular settlement plan.

Many rely on unprotected wells and streams nearby for water. During the dry season, water touts sell 5 buckets of water for US$1.

The majority of the people are poor and they end up walking long distances to near Waterfalls to fetch water.

“There is no function sewer reticulation system here in Hopley and most bathrooms and toilets have no doors. All this exposes women and girls to all sorts of harassment and violence,” says Masvusvu.

In Epworth, a similar situation plays with many women and young girls exposed to harassment and violence.

Samuel Kaverevere, director of Madana Ashe Charity Organisation, a CBO based in Epworth, says the Spotlight Initiatives has worked with volunteers and young researchers in the area to generate research to inform policy and practice in the areas of access to water, sanitation, hygiene and gender-based violence issues.

“We have trained gender champions or ambassadors, researchers, CBOs and other key stakeholders such as police and health care workers to raise awareness on GBV issues, referral pathways and social accountability,” he says.

“We have managed to raise awareness here in Epworth and people are now empowered to report cases of GBV, to make referrals and are now more knowledgeable on how they can demand action from police and clinics in cases of service delivery for victims of GBV and sexual violence.”

Before the Spotlight Initiatives was introduced in Epworth and Hopley, cases of sexual violence were rampant and people lacked awareness on how to handle the cases.

The CBO reached out to various Apostolic sects, community groupings, key populations and institutions to raise awareness on GBV issues and how such cases could be reduced in the community.

“More and more people are now reporting cases of GBV and hardliners Apostolic sects are embracing the need to protect women and young girls from sexual abuse. There is a significant change in attitudes and we are positive that with more awareness campaigns we can attain a positive change in our community.”

Epworth has more than 220 000 people, who settle here where accommodation is cheaper and people have access to stands which are not regularised or approved by the local board.

Poverty, unemployment and the Covid-19 restrictions have affected the implementation of the programme.

Drug abuse has also compounded the problems. Despite these challenges, the Spotlight Initiative has managed to make some inroads.

Looking back at the success, learning and experiences of implementing phase one of the Spotlight Initiative UN Women country representative Delphine Serumaga said:

“As UN Women working with partners at different levels, we are pleased to have been able to successfully contribute towards ensuring that women and girls realise their full potential in a violence-free, gender-responsive and inclusive environment.

“In the Spotlight programming areas, we have directly contributed to the reduction in Sexual Gender Based violence and Harmful Practices through the creation of a broad partnership with Civil Society, Government (both local and national), Private Sector, Media organisations, among others; and, we have been able to build a social movement of women, men, girls and boys as champions and agents of change at the national, subnational and community levels.

“Going forward we expect to see the growth of a vibrant movement, driven from the grassroots. At community level we expect to see an evolving and sustained transformation were gender-based violence in all its forms is discouraged and not tolerated, hidden nor promoted.”